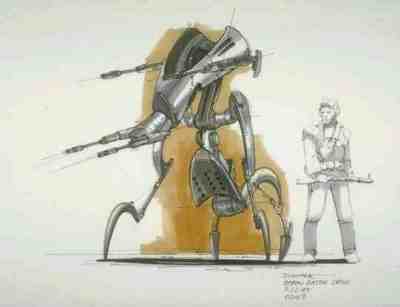 Description: The Advanced Droideka was a limited production run prototype produced during the Clone Wars, and was designed to replace the standard Droideka, however cost, and the eventual defeat of the Trade Federation by the Republic led to the line never being produced in large numbers. The Advanced Droideka, had extremely efficient logic systems as well as more powerful shield generators and quad repeating blasters, all of led to the droid being hugely effective in combat. The tactical judgement of the Advanced Droideka matched its superb targetting skills, and this was the first Destroyer Droid that would seek and use cover instead of relying on its shields and could set up effective ambushes, which made the droid even more effective than its design would suggest. These droids are highly sought after, and fetch massive prices when they rarely reach the black market, buyers should also be aware that ownership of these droids is highly illegal due to restrictions on heavy weapons and combat droids on most civilised worlds.


Page designed in Notepad, logo`s done on Personal Paint on the Amiga.
Text completely by FreddyB. Image by Lucasfilm, copyright remains with them.
Any complaints, writs for copyright abuse, etc should be addressed to the Webmaster FreddyB.