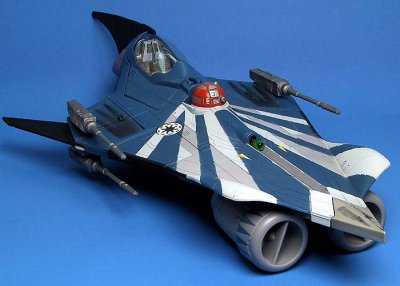 Description: The Clone Wars were a trying time for Anakin Skywalker, as he faced ceaseless warfare on scattered worlds while struggling to keep his marriage a secret, and chafing under the restrictions of the Jedi order. He found escape in his childhood love of flight, and in the simple joy of tinkering with machinery. The end result of these two passions was a heavily modified starfighter exclusive to the Chosen One.

Anakin's starfighter began as a standard Delta-7 Aethersprite that he extensively customized to suit his demanding tastes for speed and control. With four Taim & Bak laser cannons bracketing each wingtip and a proton torpedo launcher along the ship's dorsal centerline, the speedy combat vessel had greater firepower than the standard fighter. Anakin's fighter underwent numerous modifications in its lifetime, meaning that its performance varied depending on its latest features or what tricked-out power plant it sported.

Obi-Wan Kenobi was concerned that his Padawan was regarding this special project as a possession -- something frowned upon by the Jedi order. Jedi Master Saesee Tiin, a skilled starfighter pilot, encouraged the young man to keep pushing the fighter's limits, since he hoped to see the improvements pioneered by Skywalker integrated into the next generation of Jedi starfighter. Despite the Jedi mandate of severing all ties to his previous life, Anakin raised a few concerned eyebrows by including a paint scheme similar to the one used in his beloved Podracer.

Since the varied campaigns of the Clone Wars saw atmospheric combat as well as spaceflight, Anakin incorporated articulated stabilizer foils to assist in maneuverability. The main vectored thrusters included articulated mounts that allowed for greater aerial agility. Perhaps his boldest addition was a pair of TransGalMeg hyperdrive thrusters that gave his starfighter limited hyperspace capability.


Page designed in Notepad, logo`s done on Personal Paint on the Amiga.
Text completely by FreddyB. Image is from TheForce.net, and copyright resides with Lucasfilm.
Any complaints, writs for copyright abuse, etc should be addressed to the Webmaster FreddyB.