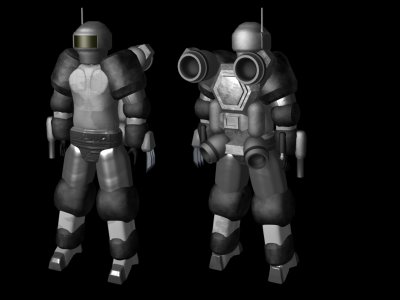 Life Support
Description: To allow the wearer to survive unaided in a vacuum the suit provides them with oxygen and heat when required for up to 24 hours.

Magnetic Boots
Description: These allow the user to walk normally in zero gravity, and to grip onto the hull of starships and other space objects.

Description: After the destruction of Alderaan a native of that world, Almek Obsidian, became somewhat obsessive about military power, and set up Core Defence Industries (CDI) to supply defence to other worlds so the same could never happen again. However the unbalanced nature of the industrialist and the corporation he founded, led to many headaches for the fledgling New Republic, as the power weapons and vessels were sold to anyone without restriction, meaning that these state of the art weapons of war were available to terrorists, pirates and other criminals. Fortunately, for the New Republic at least, Almek Obsidian died after only a couple of years, and the absence of his genius, although unbalanced, hand at the helm meant that CDI went into receivership shortly afterwards. The CDI All Purpose Battle Armour, Basic Suit is the basis for the rest of the APBA suits. A modified form of the older Blocker armour, the APBA was designed to be easily modifiable to a variety of different roles, allowing the armour to be used in space and other dangerous environments. The Space Suit is a heavier, and therefore more expensive, version of the armour with heavier plating and a number of extra additions such as weapons and other equipment required for use in space or a vacuum. As well as a small Proton Missile Launcher and Blaster Cannon, the armour is equipped with Vibro Claws to aid the user in penetrating bulkheads and vessels hulls, although users have often used them in combat. The armour is also equipped with a Thruster Pack which allows the armour to achieve a good turn of speed, although the armour itself is fairly unmanueverable and is often considered a sitting target but its plating is heavy enough to stand up to most weapons for at least a few moments as the user turns its own weaponry at any attackers.