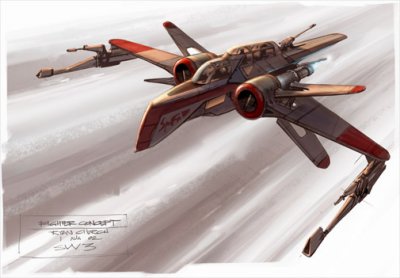 Description: Protecting the skies over Coruscant were specialized clone fighter forces flying the latest in starfighter technology. The ARC- 170 fighter was a bulky, aggressive ship covered with weapons. Three clone trooper pilots operated this advanced combat craft, with a pilot handling the flight maneuvers, a copilot operating the laser cannons mounted on the ship's wide wings, and a tailgunner operating the dorsal rear-facing cannon. The fighter also carried an astromech droid for onboard repairs.

During the Battle of Coruscant, Squad Seven, led by Clone Commander Odd Ball, provided cover to the Jedi starfighters piloted by Obi-Wan Kenobi and Anakin Skywalker. It was Odd Ball's duty, and that of his squad, to keep the droid starfighter forces off the tails of the Jedi so that they could complete their mission of rescuing the captive Chancellor Palpatine. Squad Seven suffered many casualties.

ARC-170s were stationed all over the Republic during the Clone Wars, including the aerial campaigns over Cato Neimoidia led by Jedi Master Plo Koon.

Heavily armed and more than capable of surviving and succeeding in battle operations, the ARC-170 (Aggressive ReConnaissance) fighter also functions as a lone recon scout, with extended consumables for five standard days of remote operations. It is one of the few starfighters of this era to carry an onboard class 1.5 hyperdrive engine, with a range of 5,000 light years.

The ship's heavy nose contains sensitive long-range sensors for its snoop missions. Its extendable s-foils radiate heat and serve as a conduit to deflector shield energy. They also help stabilize atmospheric flight, making the ARC-170 an effective aerial fighter as well as a space superiority vessel

The narrow spaceframe flanked by large engines is common in Incom/Subpro designs, and can be seen in PTB-626, NTB-630 and Z-95 starfighter models.

Page designed in Notepad, logo`s done on Personal Paint on the Amiga.
Stats by FreddyB. Description and Image are by LucasArts, copyright resides with them.
Any complaints, writs for copyright abuse, etc should be addressed to the Webmaster FreddyB.