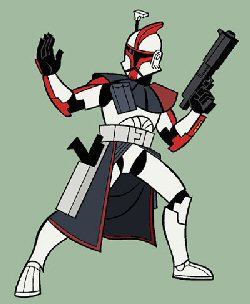 
The clone troopers of the Galactic Republic exhibited exacting uniformity in skill and appearance, but a few were designed to stand apart from the masses. The ultimate in the clone trooper ranks were the Advanced Recon Commandos, or ARC troopers, elite infantry hand-trained by Jango Fett. Only a select number of ARC troopers were bred and trained before Fett's untimely demise at the Battle of Geonosis, and they were used sparingly during the Clone Wars. At the Battle of Kamino, Prime Minister Lama Su personally activated the ARC troopers to defend Tipoca City from Separatist attack. They have also served in campaigns on Muunilinst, Jabiim and Pengalan IV. ARC troopers were used for only the most dangerous missions that require a substantial amount of independent thought. Though these troopers undergo growth acceleration like the standard clones, their docility and independence has not been at all altered. ARC troopers employ an advanced version of the clone trooper armor, and carry heavier weaponry or mission-specific gear such as reverse-polarity pulse grenades or PLEX-1 portable missile launchers.

Page designed in Notepad, logo`s done on Personal Paint on the Amiga.
Stats by FreddyB, descriptive text from StarWars.com. Image is by LucasFilm, copyright resides with them.
Any complaints, writs for copyright abuse, etc should be addressed to the Webmaster FreddyB.