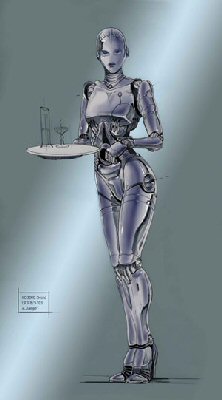 Description: Wherever Senators congregate, their mechanical attendants follow. While the look of the politicians representing the worlds of the galaxy varies greatly, their droids are often surprisingly uniform. Droid manufacturers and distributors on Coruscant sell their wares in huge numbers to the Senate politicians, resulting in some very commonly encountered models.

While the standard humanoid protocol droid is a bestseller, the BD-3000 luxury attendant droid was been rapidly growing in popularity. Its chromed finish, smooth surfaces and eye- pleasing shape make it standout, whether in the halls of the Senate chambers, or the polished corridors of the Galaxies Opera House.

Manufactured by LeisureMech Enterprises, a design firm based out of the Corporate Sector, the BD-3000 is, for the most part, a triumph of style over substance. While the luxury droid's processors and software packages make it a capable and versatile business attendant, such features are not what drive its 25,000-credit manufacturer's suggested retail price. It's the gleam of its finish, the curve of its sculpt and the walk-cycle programmed into its gyro balance circuitry that droid review journals routinely cite as cause for its demand.

The BD-3000 has a capable language processor and linguistic database. While it pales in comparison to the AA-1 VerboBrain found in Cybot Galactica protocol droids, it is nonetheless capable of translating over 1.5 million forms of communication. Its vocabulator system can produce a wide variety of sounds and voices, including a number of popular feminine factory pre-sets with such descriptions as "perky" and "sultry." The BD-3000 comes with an extensively engineered behavioral circuitry matrix that gives it a wide variety of personality types.

In addition to its business administration programming, the standard BD-3000 comes equipped to handle over 25 secondary functions, including repulsorlift pilot, cook, tailor and nanny. Expansion slots in both hardware and software allow the BD-3000 to be fitted with combat applications, and some have been known to be reprogrammed as covert bodyguard droids, though LeisureMech does not support such modifications.

Much to the chagrin of LeisureMech publicists, BD-3000 droids have also proven popular in the criminal underworld, where unlicensed aftermarket add-ons -- such as a set of fully articulated lekku -- have seen the droids flourish in far seedier roles than originally intended.


Page designed in Notepad, logos done on Personal Paint on the Amiga.
Stats by FreddyB. Image and descriptive text from StarWars.com, copyright resides with LucasFilm.
Any complaints, writs for copyright abuse, etc should be addressed to the Webmaster FreddyB.