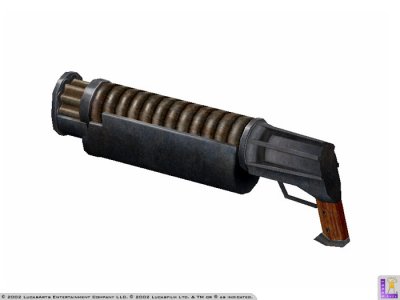 * : The Bryar Pistol has a secondary fire mode charging up energy within its galvern pattern. For each action that the trigger is held for it adds a +1 to the damage up to a maximum of +3D, but also uses an additional 2 charges from the weapons magazine. This means a fully charged shot of 8D damage expends 19 units of energy and requires 9 actions charging before firing, making Bryar a slow firing but devastating weapon.


Description: Kyle Katarn's weapon of choice, the Bryar pistol may be slow to fire, but it is also incredibly accurate. The primary attack fires a deliberate, single shot that causes great damage. Secondary Fire is initiated by holding the fire button down to charge the blaster round in the chamber, creating a highly damaging bolt.


Page designed in Notepad, logo`s done on Personal Paint on the Amiga.
Stats by FreddyB, Descriptive Text by LucasArts. Image is by LucasArts, copyright remains with them.
Any complaints, writs for copyright abuse, etc should be addressed to the Webmaster FreddyB.