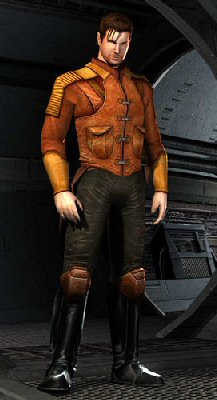 
When young Carth Onasi signed up to join the Galactic Republic military, he fully believed in the strength of the institution. A loyal soldier, skilled pilot and superior tactician, he operated with distinction in both small border skirmishes and in major engagements.

Though the events of the Mandalorian Wars forever cemented Carth's reputation as a hero, their aftermath dealt a fatal blow to Carth's idealism. In the Sith resurgence that targeted a weakened Republic, the evil Darth Malak sundered Carth's homeworld of Telos. Carth's young wife was killed, and Dustil, his son, was missing.

Compounding this tragedy was the betrayal that further fueled the Sith conquest. Some of the highest-ranking officers of the Republic were seduced by the Sith, including Carth's trusted mentor, Admiral Saul Karath.

Once, honor and loyalty drove Carth to fight the Sith. Vengeance and hatred threatened to replace these laudable attributes, as Carth made it his life's goal to bring Karath to justice.

Carth found himself unable to trust anyone, particular the inscrutable Jedi he was often teamed with in his missions. He still carried out his duty, escaping from the Endar Spire over Taris and freeing the captive Jedi Bastila Shan before that world was also destroyed by the Sith. He accompanied Bastila and a special Jedi initiate in their mission to uncover the mystery of the Star Forge. On this quest, Carth had his chance at revenge, killing Karath on the bridge of the Leviathan.

During the search for Darth Malak, Carth was a 38 standard years old. He was a handsome man with brown hair. He typically dressed in fatigues and flight jacket, and favored blaster weaponry. He most often piloted the Ebon Hawk during this mission.