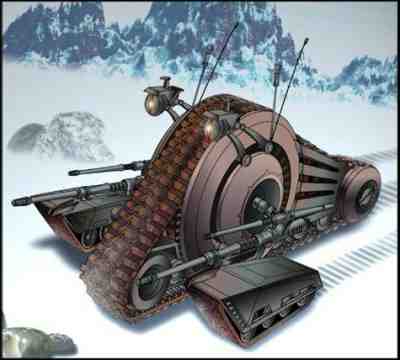 Description: The Corporate Alliance Tank Droid was designed to deal with groups who attacked the interests of the members of the Corporate Alliance, smashing into their camps and wiping out their members. Although many considered this heavy handed, it made it no less successful in dealing with pirates and raiders. When the Corporate Alliance joined the Confederacy of Independant Worlds in fighting against the Old Republic, their tank droids were an immediate boost to the fighting forces of the fledgling Confederation. These droids suffered the same fate as the Banking Guilds Spider Droids and the Trade Federations Battle Droids, being mainly destroyed by the forces of the Republic. The few remaining were supposed to be destroyed, but ended up languishing in a warehouse on the world of Aidyn. When Aidyn declared its independance from the Empire after the Battle of Endor, the Tank Droids were discovered and pressed into use as both defenders of Aidyn, and as a source of income for the world. Several hundred of these droids have been sold off to whoever could afford the price, while many more are retained by the world as their army.