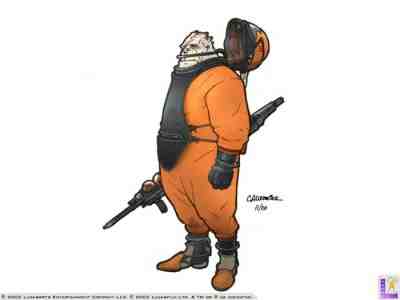 
The residents of the world of Cazzadon are a hardy species who live in the caves under the surface of their toxic world. It is believed that Cazzadon was a normal world but a war many millenia ago caused the change in the atmosphere forcing the inhabitants into the subterranean existance, this theory is upheld by the fact that Cazzadonian eyes operate in the same way as surface dwellers, requiring light to work, a rarity in nocturnal and subterranean species. The Cazzadonians themselves have adapted well, carving out great cities under the surface of their world, and becoming well adapted to life underground, sensitive to the smell of build-ups of explosive gas, resistant the the toxins that seep into the ground from the ravaged surface and well adapted to the strongly carbon dioxide laden air of their cavern. Cazzadonians are considered to be somewhat stubborn, and the phrase "as useful as butting heads with a Cazzadonian", has both a real meaning as well as a metaphoric one, as Cazzadonians enjoy both winning arguements as well as locking their short vestigial horns together in head butting contests.

Cazzadonians have been members of the galactic community for many centuries, and their reliance on technology on their homeworld has converted into useful skills once away from it, although they find themselves somewhat hindered by the low amounts of gravity and carbon dioxide on other worlds.

Sense of Smell: Because build ups of explosive gases can cause explosions underground, the Cazzadonians have become sensitive to their smells. Cazzadonians have six nostrils and get a bonus 2D to Perception to detect changes in atmosphere and inhaled gases.


Head-Butting: Cazzadonians are decended from animals somewhat like terrestrial Rams, and have eight vestigial horns on their heads to prove it. Part of their mating practices still involve locking these horns with each other, and this has become much of a ritual greeting between male Cazzadonians, although females also have the horns, they do not tend to butt heads.

Carbon Dioxide Atmosphere: Cazzadon has an atmosphere heavy with carbon dioxide due to the small amount of plant life on it. Visitors to the world will have to wear rebreathers to provide them with their required levels of oxygen. Although Cazzadonians can survive in normal atmospheres, the high levels of oxygen tend to make them somewhat lightheaded, and makes them act somewhat drunk, for this reason Cazzadonians tend to wear apparatus to blow carbon dioxide into their lungs through their lowest two nostrils, which helps alleviate this problem.

High Gravity World: Cazzadon is a higher gravity world, and Cazzadonians feel uncomfortably light in normal gravity, therefore they tend to adjust their starships to their homeworlds gravity level, this makes other species feel uncomfortably heavy, and makes them tire quickly.

Page designed in Notepad, logo`s done on Personal Paint on the Amiga.
Text completely by FreddyB. Image is by LucasArts, copyright resides with them.
Any complaints, writs for copyright abuse, etc should be addressed to the Webmaster FreddyB.