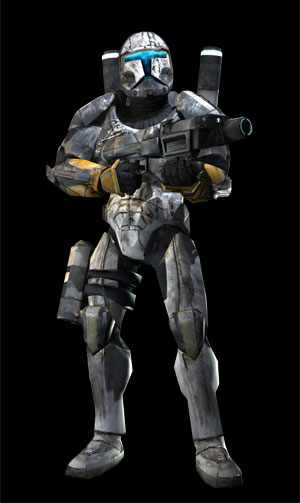 
The Kaminoans encountered a great deal of difficulty with the independent and hard-to-command ARC troopers. Eventually the experimental soldiers were relegated to stasis fields and work was begun on a new type of warrior: the clone commando.

Veering away from rogue clone individuals, the Kaminoans took as their example the fiercely efficient hunting pods of the native aiwha. Candidates were plucked from the regular clone batch, and segregated into groups of four. During their training and education, these "pods" were kept together, forced to depend upon each other, and pitted against other pods in combat. The Kaminoans soon found they had a number of small squads, each highly-trained and fiercely-cohesive, yet divisible into smaller units for varied mission profiles. Ultimately, neither the regular army clones nor the ARC troopers could match them when it came to organization and team-work. The experiment was a success.

The Jedi Generals and the Republic leadership immediately identified the potential of these strike teams, and set them to work at flash-points across the galaxy. Equipped with specialized weaponry like the DC-17m rifle, special tactical visors, and Katarn-class body armor, the commandos infiltrated the deepest, darkest reaches of the Separatist strongholds. The Clone Wars were won or lost, more often than not, due to the efforts of small, anonymous squads of Republic commandos, working behind the scenes and deep behind enemy lines to do what larger armies could not.

Page designed in Notepad, logo`s done on Personal Paint on the Amiga.
Text completely by FreddyB. Image is by LucasFilm, copyright resides with them.
Any complaints, writs for copyright abuse, etc should be addressed to the Webmaster FreddyB.