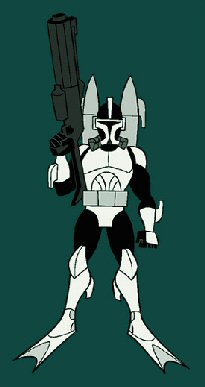 
Though clone troopers were genetically identical in design, a few elite groups underwent specialized training to better prepare them for specific environments. These combat skills were supplemented by equipment modified for use on specific terrains. One notable group was the clone SCUBA troopers. These aquatic assault troopers were outfitted with modern gear that allowed them to effectively wage war against aquatic cultures that would otherwise enjoy the advantage of fighting in a difficult native environment. A clone SCUBA trooper's armor is lighter in weight than the standard plastoid-alloy composite armor worn by the line infantry. The helmet features lenses and sensors that help penetrate the ocean murk and bring underwater enemies into crisp focus. Miniaturized scrubbers built into the breathing unit are able to extract oxygen from water environments, and allow for attachment of oxygen tanks. A clone SCUBA trooper wears an aquatic propulsion pack and has maneuverability jets incorporated into his shin guards to allow for impressive underwater agility. Clone SCUBA troopers carry specialized blaster rifles with a modified collimator barrel array that retards blaster bolt diffusion from the water environment. These troopers are typically outfitted with explosives that take advantage of an ocean's ability to transmit concussive shock. General Kit Fisto led an army of clone SCUBA troopers on Mon Calamari during the Clone Wars.

Page designed in Notepad, logo`s done on Personal Paint on the Amiga.
Stats by FreddyB, descriptive text from StarWars.com. Image is by LucasFilm, copyright resides with them.
Any complaints, writs for copyright abuse, etc should be addressed to the Webmaster FreddyB.