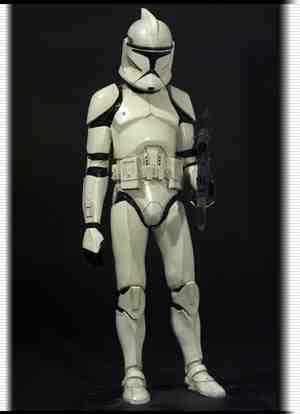 
CloneTroopers were the main combatants on the side of the Old Republic during the Clone Wars, which in fact were named after them. Cloned from the bounty hunter Jango Fett by the Kaminoan cloners, they were better trained and skilled than the StormTroopers that eventually replaced them, however as recruiting is far cheaper than cloning they were doomed because of the Empires policy of using the cheapest solution to any problem. CloneTroopers fought side by side with the Jedi Knights, until the Jedi themselves were declared the enemy, and the CloneTroopers hunted them down aided by Darth Vader. Their armour offers similar protection to the later sets of StormTrooper Armour, but is bulkier and more restrictive, making it somewhat difficult to fight in. Specialist CloneTroopers were trained as pilots, gunners and commanders, these were distinguished from normal troopers by coloured panels on their armour, normal trooper armour was the same simple white panels over the black bodyglove as the later StormTroopers.

Page designed in Notepad, logo`s done on Personal Paint on the Amiga.
Text completely by FreddyB. Image is by LucasFilm, copyright resides with them.
Any complaints, writs for copyright abuse, etc should be addressed to the Webmaster FreddyB.