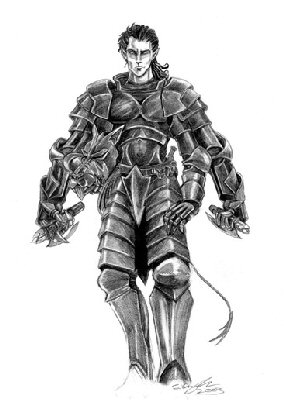 
The Codru-Ji are a four armed humanoid from the isolated world of Munto Codru, and appear to be attractive humans with four arms, although their life cycle shows they are quite different. Codru-Ji are born as six legged canines, called Wyrwulves, and although they appear as bestial in this form they are as capable of rational thought and emotion as an adult. Wyrwulves cannot speak, but are taught the essentials they will need as adults until at puberty they enter a cocoon stage re-emerging after a few weeks as an adult Codru-Ji. On closer examination of adults of this species it is possible to notice their canine ancestry, with slightly elongated ears and claws, their features are also slightly wolflike but this does not detract from their attractiveness at all.

Munto Codru was once home to a highly technologically advanced race, and their ruins dot the planets surface, although no one knows what happened to this race the Codru-Ji make extensive use of the buildings using them a government palaces and castles. However certain of these buildings are shunned by the superstitious species who believe that they are haunted by their creators.


Four Arms: The Codru-Ji have four arms and their brain allows them equal dexterity with all of them, this allows a Codru-Ji character to ignore the first dice of action penalties as they can achieve more actions in a single round.


Two Stage Lifecycle: Codru-Ji are born as six legged canines, and spend their lives until puberty in this form, many other species will mistake a Codru-Ji's young as a pet or other household animal, which may lead to some diplomatic problems.

Coup Abductions: Codru-Ji culture includes the habit of Coup Abductions, where a prominent member of society's children will be kidnapped in exchange for power or money. This is considered to be matter of fact by the Codru-Ji, and other species will find it disturbing to see them take the abduction of a child so casually, but the Codru-Ji are fully aware that these abductions never lead to the child being harmed.

Page designed in Notepad, logo`s done on Personal Paint on the Amiga.
Text completely by FreddyB. Image is by Stu Cunningham, copyright resides with LucasFilm.
Any complaints, writs for copyright abuse, etc should be addressed to the Webmaster FreddyB.