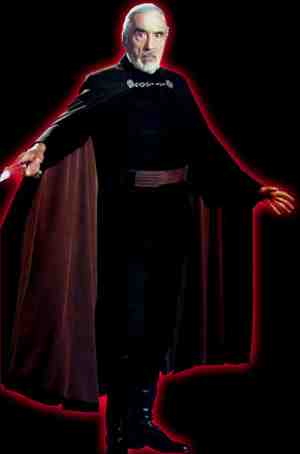 
It was a great blow to the Jedi order when Count Dooku voluntarily renounced his commission. A strong-minded man, Dooku's ideas were often out of step with those of the Jedi Council, despite the fact that his former mentor, Yoda, held a lofty position in that governing body. His challenging views were often echoed by his former Padawan, Qui-Gon Jinn, another Jedi who would on occasion defy the Council.

Dooku was a political idealist. He felt that the Jedi weakened themselves by serving an institution as corrupt as the Republic. After his departure, he disappeared for years, re-emerging as a political firebrand fanning the flames of rebellion in the galaxy. In an alarmingly short time, Dooku rallied thousands of systems to his cause, building a growing Separatist movement that threatened to split the Republic.

Opportunists working in Dooku's name would start flashpoints of violence, and it was all the Jedi could do to maintain order in these turbulent times. For all the strife, the Jedi Council refused to believe that Dooku was personally responsible for the worst of the conflicts, believing that his Jedi training elevated him above such acts.

But the Jedi didn't realize Dooku's secret. Behind a veneer of elegant charisma and well-tabled political arguments, Dooku had been corrupted by the power of the dark side. After his departure from the Jedi order, Dooku was seduced to the dark side by Darth Sidious, the Dark Lord of the Sith. By Sith tradition, Dooku adopted the name Darth Tyranus and added deceit and treachery to his already formidable array of weapons.

In both guises, Dooku began recruiting agents for what would eventually amount to the death of the Old Republic. As Tyranus, he contacted the notorious bounty hunter Jango Fett to become the template for a hidden clone army on Kamino. As Dooku, he appealed to the greed of the galaxy's most powerful commerce barons to consolidate their forces to challenge the Republic.

Deep within the mighty spires of Geonosis, Dooku chaired a meeting of the minds to formally create the Confederacy of Independent Systems. Separatist Senators alongside representatives from the Commerce Guild, the Trade Federation, the Corporate Alliance, the InterGalactic Banking Clan and the Techno Union pooled their resources together to form the largest military force in the galaxy. The Separatists were ready for war.

The Jedi Knight Obi-Wan Kenobi discovered the treasonous meeting and warned the Republic, but not without being captured. Dooku met with Kenobi in the Geonosian dungeons, and revealed to Obi-Wan the truth about the Republic -- that it was, in fact, becoming increasingly under the control of Darth Sidious. Distrusting of Dooku's words, Obi-Wan refused to believe and refused to join Dooku in rooting out the corruption.

Kenobi was soon joined by Anakin Skywalker and Padmé Amidala, who had come to Geonosis in an ill-fated attempt to rescue him. Dooku placed the three captive heroes in an execution arena, but their deaths were staved off by the timely arrival of Jedi reinforcements.

The droid armies of the Separatists engaged the Jedi, and later the newly crafted Clone Army of the Republic. Dooku attempted to escape but was intercepted by Anakin Skywalker and Obi-Wan Kenobi. The two Jedi challenged Dooku to a lightsaber duel, but Dooku's masterful skills in old- style lightsaber combat made short work of the younger combatants. As they lay wounded, another Jedi entered into Dooku's secret hangar.

The Jedi Master Yoda confronted Dooku. The two engaged in a titanic struggle of Force powers, neither besting the other. It came down to a contest of lightsabers. In a blurring tangle of speed and light, the two masters of the Force dueled. Unable to find an advantage, Dooku distracted Yoda by endangering Kenobi and Skywalker with a toppling crane. As Yoda used the Force to save his fellow Jedi, Dooku fled.

Dooku escaped, with the Jedi aware of his succumbing to the dark side, but yet still unaware of his Sith allegiance. Aboard his exotic interstellar sail ship, Dooku traveled to a decrepit warehouse district on Coruscant. There, he met with his master, Darth Sidious, and delivered the good news.

The Clone Wars had begun.

Dooku had studied the ways of the Force for almost eight decades, becoming one of its most powerful practitioners, though his ultimate loyalty was not to the structured protocols of the Jedi order, but rather to his own intuitions and ideals. His strong sense of independence concerned many, and even his mentor, Yoda, had difficulty reining him in.

When Dooku was 13 years old, he was chosen to be the Padawan apprentice to Jedi Master Thame Cerulian. This drove a wedge between Dooku and his childhood friend and fellow Jedi learner, Lorian Nod. Nod was also headstrong and mischievous, and he tried to blame Dooku for the theft of a Sith Holocron. This led to a long-lasting rivalry between the two, and to Nod's expulsion from the Jedi Temple.

Despite his stubbornness, the Jedi Archives record Dooku as being a formidable Jedi. He settled numerous disputes on scattered worlds and was unequaled in a classical form of lightsaber combat. Dooku was a man of remarkable character and remarkable lineage. His birthright as the Count of Serenno also afforded him incredible wealth, which he used in his political career as Separatist leader.

After leaving the Jedi order, Dooku disappeared for years. He first reemerged on Raxus Prime, complete with a fiery rhetoric lambasting the Senate and the Jedi order's complacency in the visible erosion of morals and ideals of the Republic. Since that time, his base of operations became mobile, as he traveled from world to world, fomenting secession and leading the Separatist movement that soon developed an alarming cohesion.

It is yet unknown when exactly Dooku abandoned himself to the dark side of the Force, though he had apparently experimented with forbidden lore in the past. Rumors abound that Dooku was familiar with Sith teachings stored within a dark Holocron kept in the Jedi Archives.

With the Clone Wars in full effect, Count Dooku -- now Darth Tyranus -- fully embraced the ancient teachings of the Sith. One of his first campaigns of the war was the unleashing of an ancient Sith weapon, the Dark Reaper, against the forces of the Republic and the Jedi Knights. Dooku was the most publicly visible face of the Confederacy, though he maintained no command center and kept mobile during the war. His charismatic ways lured many worlds into the Confederacy, spreading the war throughout the galaxy.

It was Dooku who founded the Confederacy by uniting the most powerful commerce barons in the galaxy to his cause. He also personally recruited the Confederacy's most deadly operatives: his dark side disciple Asajj Ventress and the bounty hunter Durge.
Dex: 3D
Dodge: 10D
Lightsaber: 13D
Blaster: 6D

Page designed in Notepad, logo`s done on Personal Paint on the Amiga.
Stats by FreddyB, Descriptive Text and Image are from StarWars.com, copyright remains with LucasFilm.
Any complaints, writs for copyright abuse, etc should be addressed to the Webmaster FreddyB.