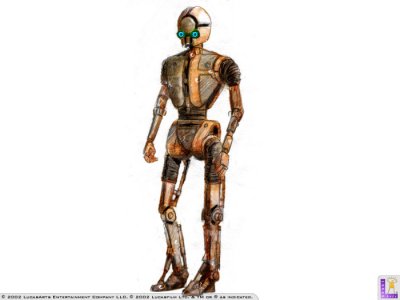 Description: The B Series Protocol Droid was the 3-PO of its era, serving in their millions across the entire Republic, so far more advanced than their competition they were often recruited for other roles as well as simple translation. These droids were often found serving in shops, restaurants and in other customer relations roles as well as serving in offices and factories. These versatile droids became a top seller for Czerka making the corporation a galactic success story, and while the droids had several upgrades through the C and D series of droids, none were as totally successful as the original B-Series droid, although the more advanced skill programming did mean that the later droids were more suited to supervisory and management roles.


Page designed in Notepad, logos done on Personal Paint on the Amiga.
Text by FreddyB. Image is from Knights of the Old Republic. Copyright remains with LucasArts / BioWare.
Any complaints, writs for copyright abuse, etc should be addressed to the Webmaster FreddyB.