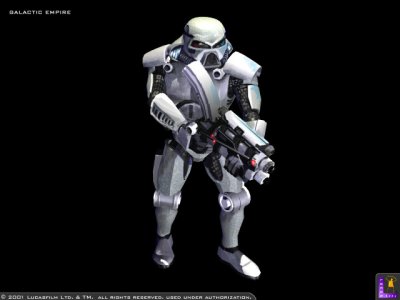 Description: As a veteran of the Clone Wars, Rom Mohc saw firsthand both the limitations and the advantages of battle droid infantry. When he rose to power as a general in the Imperial military, he masterminded the dark trooper project, which would result in an advanced battle droid meant to serve as a "super stormtrooper."

This ambitious project was developed in stages, as concept droids proved the feasibility of Mohc's designs. The Phase One dark trooper had an unfinished appearance, with an exposed metal skeleton cast of hardened phrik, a durable alloy mined primarily from the Gromas moons. The trooper was a towering humanoid, armed with a razor-edged carving blade and arm-mounted blast shield. Its programming was primitive, and its drive to attack was relentless.

The final and most powerful model was the Phase Three dark trooper. Only one was known to exist, in the personal employ of General Mohc. A towering goliath with broad armored shoulders, this dark trooper could operate independently or be used as an armored powersuit. Connected to its massive arms were a deadly cluster of firing tubes which dispensed a seemingly endless supply of seeker rockets.

The dark troopers were first unleashed shortly after the Battle of Yavin, on the unsuspecting Alliance installation of Tak Base. The Empire launched the droids via hyperspace capsules, in a fashion similar to the distribution of deep space probe droids. The inhuman soldiers tore through all resistance, and devastated the Rebel outpost on the planet Talay. Investigating this disturbing new assault was Alliance mercenary Kyle Katarn. He uncovered the secret dark trooper project, and traced it back to its source, the immense production facility aboard the Arc Hammer, General Mohc's flagship.

Katarn infiltrated the Arc Hammer and sabotaged the titanic vessel. The Emperor was so infuriated by the loss of the Arc Hammer, and the incredible investment in the dark trooper project, that all research into stormtrooper battle droids ended with Mohc's death.


Page designed in Notepad, logo`s done on Personal Paint on the Amiga.
Stats by FreddyB, descriptive text from StarWars.com . Image is by LucasArts, copyright resides with them.
Any complaints, writs for copyright abuse, etc should be addressed to the Webmaster FreddyB.