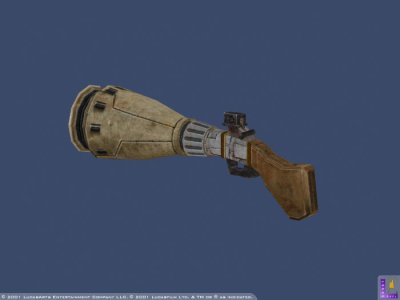 * : The DEMP 2 does large amounts of Ionisation damage which causes massive damage to electronic systems, but unlike other Ion Weapons, the DEMP does this to such a large degree it also causes interference with the electricity within an organic beings nervous system with corresponding damage to the being. The DEMP 2 also has a secondary firing mode which can charge up the Ion Pulse to do extra damage, for each action that the trigger is held for it adds a +1 to the damage up to a maximum of +2D and adds an effect radius of one meter, however this also uses an additional 3 charges from the weapons magazine. This means a fully charged shot of 8D/4D damage effecting all targets within 6 meters of the impact expends 19 units of energy and requires 7 actions charging before firing.


Description: Commonly referred to as the DEMP 2, the primary mode of the pulse rifle shoots out a concentrated energy ball which is very effective against droids, probes and other mechanical devices. The DEMP 2 also has a secondary fire mode which produces fast attacks that cause radius damage to droids and living things.


Page designed in Notepad, logo`s done on Personal Paint on the Amiga.
Stats by FreddyB, Descriptive Text by LucasArts. Image is by LucasArts, copyright remains with them.
Any complaints, writs for copyright abuse, etc should be addressed to the Webmaster FreddyB.