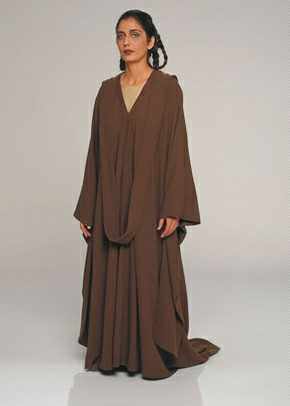 These are the known powers Depa Billaba possessed and it is believed that she had access to other powers.


The orphaned Billaba was rescued from the space pirates who slew her family by the respected Jedi Master, Mace Windu. Windu sensed Billaba's Force potential, and brought the six-month old infant to Coruscant for training. On Coruscant, Depa learned to use her special abilities for the good of the galaxy. She has embraced the traditional culture of Chalacta in honor of her slain parents. As a result the Jedi Master was particularly attuned to the minds and personalities of her peers in the Council Chamber. Adorning the bridge of her nose are Chalcactan marks of illumination, testament to her spirituality. Shortly after the Battle of Naboo, Billaba followed her former master Mace Windu to the smuggler's moon of Nar Shaddaa on a mission.

A serene yet strong presence on the Jedi Council, Depa Billaba was one of the members of that august body during the waning days of the Jedi order. Billaba sat between Eeth Koth and Plo Koon. She was present when Jedi Master Qui-Gon Jinn brought the young Anakin Skywalker before the Jedi Council, requesting that the boy be trained as a Jedi. Billaba also attended Jinn's funeral and the victory parade that marked the liberation of Naboo shortly thereafter. The Force runs strong in Billaba's family, and a close relative of hers is also a Jedi Knight.