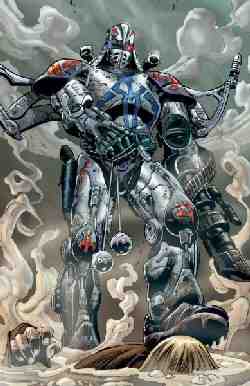 SPECIAL ABILITIES
Regeneration:- Gen'Dai can regenerate damage at a highly accelerated rate, healing at one speed category faster than other lifeforms (eg to heal naturally from a wound a normal character would have to wait three days, a Gen'Dai would only have to wait three hours). This regenerative capacity allows them to regenerate lost limbs, however this is a slow process and pales into insignificance compared to their ability to re-attach severed limbs by holding them against the stump and waiting for the wound to heal. They can also burn force points to heal one wound category instantaneously, making them capable of incredible feats of healing especially when combined with their ability to re-attach severed limbs.
Hibernation:- When Mortally Wounded a Gen'Dai can enter a state of hibernation in which they can remain while they heal twice as slowly as other lifeforms (eg requiring 2 months before making a healing roll to improve to incapacitated).
Distributed Circulatory and Nervous Systems:- Gen'Dai have no central brain or heart structure making them extremely resistant to damage, this gives them a bonus 3D to their strength to resist wounds and damaging attacks.
Longevity:- Gen'Dai can live for many millenia without physically weakening, however their minds succumb to the years and they find themselves suffering increasing levels of depression, anxieties and insanities until their final years are lost in madness.


The bounty hunter known as Durge had weathered centuries of violence and warfare, emerging as a merciless and nearly unstoppable warrior driven by ancient vendettas. Though he identified himself as a bounty hunter, he held no guild allegiance, answered to no benefactor, and seemed to have no need of riches. He hunted for the pure sport of it, to feed an insatiable bloodlust that spanned literally hundreds of worlds and almost two thousand years.

When completely encased in his battered high impact armor, Durge's true alien heritage was obscured. Though humanoid in appearance, Durge was a Gen'Dai, a rare species with an unusually long lifespan -- some Gen'Dai reportedly have lived for over four thousand years.

The peculiar nervous and circulatory systems of the Gen'Dai makes them extremely resistant to physical injury. The Gen'Dai physiology boasts millions of nerve clusters throughout the body, and a vascular system that distributes blood without the need of a central heart. Lacking the vulnerable vital organs of most humanoids, a Gen'Dai could sustain multiple lacerations and even, it is rumored, complete dismemberment and yet still survive. In addition to these extremes of endurance, the distributed neural network gives the Gen'Dai phenomenal reflexes. Should a Gen'Dai sustain too many injuries, they are capable of entering into extended periods of hibernation, during which they can heal wounds, recover from disease, and slow the aging process.

With such formidable physical abilities, it is fortunate for the galaxy at large that the Gen'Dai are, by nature, not an aggressive species. They are nomadic, and their home world has been lost to the ages. Due to a low birthrate, the Gen'Dai are very rarely encountered, and they usually avoid confrontation if possible. Though the Gen'Dai are physically suited for long life, their minds weaken with age, and the species is susceptible to depression, hysteria, and other forms of psychosis.

The Gen'Dai that would become Durge was born two thousand years before the fall of the Republic, and was regarded by his elders as an exceptional physical specimen at a young age. A predilection for aggression, coupled by witnessing bounty hunters in action, forever steered young Durge into a lifetime of violence. The lure of the blood trade drew Durge away from his tribe and into the rest of the galaxy. For centuries, he studied under the most experienced and dangerous bounty hunters he could find.

About a millennia before the Battle of Naboo, when the galaxy was wracked by warfare waged between the Jedi Knights and Sith Lords, Durge was in the employ of one of the few remaining Sith. In this time, he squared off against many a Jedi, learning their fighting techniques, and developing weaponry and combat tactics to counter their moves. When the Sith were finally wiped out at the Battle of Ruusan, Durge went into hiding to avoid Jedi reprisals. He adopted dozens of different aliases while continuing his career as a hunter, amassing a sizable fortune.

Nine hundred years later, Durge was hired to kill the leader of the Mandalorians. Though he succeeded, the Mandalorians struck back and managed and subdue Durge. Leave it to the Mandalorians to devise a means of restraining a Gen'Dai. They turned Durge's longevity against him, finding ways of inflicting pain throughout his scattered nerves. He was a victim of unspeakable torture, unable to die.

Durge was able to escape the Mandalorians, and retreated to parts unknown to hibernate and recover. It took nearly a century to undo the damage the Mandalorians wrought. Though his physical body had healed, Durge's already dangerous psyche was pushed further past the brink of sanity.

When Durge emerged from his slumber, he sought vengeance on the Mandalorians. He was cheated of his revenge as he learned they were all but extinct. He soon found purpose, though. He had awakened to a galaxy at war, a galaxy where the Jedi Knights led clone soldiers in battle against the automated troops of the Confederacy. The charismatic Count Dooku lured Durge into his ranks, and the ancient bounty hunter relished an ironic twist in his quest for retribution.

The Republic clones were cast from a Mandalorian genetic template. Though the galaxy may be bereft of true Mandalorians, their legacy lived on in the form of clone troopers. Durge would take great satisfaction in being able to kill legions of his sworn enemies.

In becoming Dooku's henchman, the bounty hunter was teamed up with Asajj Ventress, a Dark Jedi and commander within the Separatist military. The two were formidable adversaries for the Republic, and Durge took the lives of many Jedi with great zeal. Alongside Ventress, Durge unleashed a horrible chemical weapon attack on the Gungan colony moon of Ohma-D'un. The Jedi were shocked to discover Durge, a warrior like no other on an increasingly deadly battlefield. Durge and the threat of chemical weaons returned on the Separatist outpost of Queyta.

Durge was also dispatched to bolster the security of Muunilinst, the homeworld of the InterGalactic Banking Clan. He organized and led a droid army of IG lancer droids, creating an elite rapid deployment military force to protect this key world of the Confederacy.

Durge led his droid forces in defense of Muunilinst when a huge Republic taskforce attacked the planet. Durge's army inflicted great damage to the armored vehicles of the Republic army, but Durge was ultimately bested in one-on-one combat with General Obi-Wan Kenobi.

In addition to Durge's frighteningly powerful physical abilities, he was a walking arsenal. He was proficient with ranged weapons like his twin blasters, melee weapons like a spiked flail, and thrown weapons like a set of energized bolas. Durge's heavy armor included wrist darts and forearm- mounted energy shields that let him parry lightsaber attacks for short periods of time. Durge often used an agile rocket pack as well as an extensively modified swoop speeder bike.


Page designed in Notepad, logo`s done on Personal Paint on the Amiga.
Text by StarWars.com, stats by FreddyB. Image is by LucasArts, copyright resides with them.
Any complaints, writs for copyright abuse, etc should be addressed to the Webmaster FreddyB.