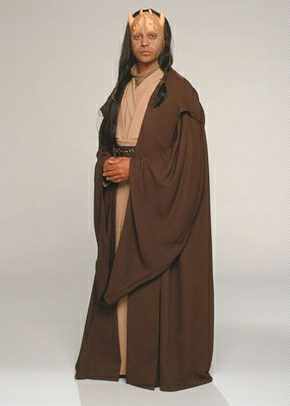 These are the known powers Eeth Koth possessed and it is believed that he had access to other powers.


Though a Zabrak, Koth does not hail from the planet Iridonia. Instead, he was born in the squalor of Nar Shaddaa, the smuggler's moon orbiting the Hutt-controlled planet of Nal Hutta. When Koth was four years old, his Force potential was discovered. Brought before the Council, Koth was first deemed too old to begin Jedi training. His remarkable mental discipline, however, convinced the Council otherwise.

Like other members of his species, Koth had seemingly interminable willpower and endurance to physical pain. His raw physical abilities, mental disciplines and Force talents were honed by his master, and once Koth attained Knighthood, he shared his talents with his Padawan Sharad Hett.

Eeth Koth was a member of the Jedi High Council in the final years of the order. From within the polished towers of the Jedi Temple on Coruscant, the Council governed the actions of the Jedi Knights. Koth one was one of the 12 Jedi present when Qui-Gon Jinn presented Anakin Skywalker as the chosen one to the Council.

Koth was a humanoid male whose face was etched with simple tattoos. A crown of vestigial horns sprouted from his skull.