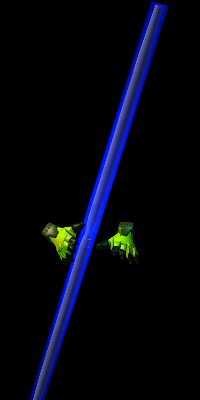 Description: The Galactech PH-20 Energy Staff is an older weapon designed to give non-force users some of the advantages that Light Sabers give Jedi. The is a solid device containing an advanced energy field generator which sheaths the entire device in an extremely damaging field of energy. This causes damage to everything that the staff touches except the specially designed gloves which also contain the weapons controls. When activated the staff is almost immune to damage because it is so hard to actually get through the sheath of energy, giving the user a weapon which can actually parry light sabers without taking damage from their blade. Energy Staffs were minorly popular in the final days of the Republic, when rumours of Dark Jedi abounded, and the Jedi themselves were beginning to be seen as a menace. However the weapons were rapidly retired from production when the only remnant of the Jedi order was Darth Vader, and weapons manufacturers were afraid of the repercussions of any action which could be seen as anti-Imperial. The weapons have a high resale value because of the likelyhood that any buyer is desperate get their hands on this uniquely anti-Jedi weapon.