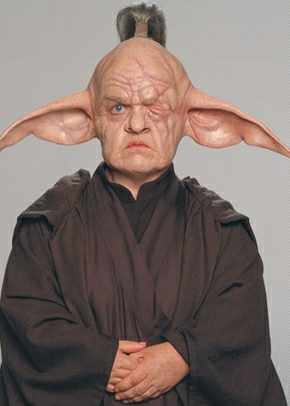 SPECIAL ABILITIES
Fearless: Lannik are not easily frightened. They get a +2 pip bonus to Willpower rolls when resisting Intimidation skill rolls against them.

These are the known powers Even Piell possessed and it is believed that he had access to other powers.


The Jedi High Council was isolated from the rest of the bustle of Coruscant, convening in a circular chamber high above the cityscape. One member of this august order was Even Piell, a diminutive Jedi Master who was present when Anakin Skywalker was brought before the Council for training. Even Piell was a small humanoid with pink skin, large drooping ears, a topknot and a scarred face.

The humorless and fierce Piell hails from Lannik, a planet long plagued by violence. Corellian diplomats attempted to help the struggling world, but were ambushed by Red Iaro terrorists in the heart of the Lannik High Court. Even Piell came to their rescue, and single-handedly defeated seven attackers, though he lost his left eye in the melee. The daughter of the diplomats, the Jedi Adi Gallia, had long felt indebted to Piell. Piell carried his scar as a badge of pride and symbol of his honor, bravery and persistence.