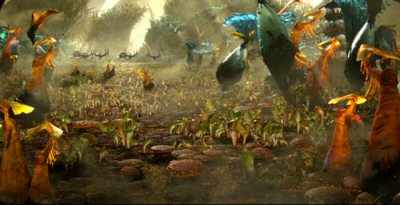 
Though Commerce Guild Presidente Shu Mai called Castell the planet of her birth, her home was Felucia, site of a sprawling compound outside the city of Kway Teow that served as a remote office and private retreat. The Gossams had colonized Felucia early in their interplanetary history, before moving onto larger and more lucrative exploits. Deemed too wild to support massive Gossam colonies, Felucia eventually became an exotic retreat for the wealthy and the poorly paid citizens that supported their extravagant whims.

The hardships of settlement produced few cities of note on Felucia, including Kway Teow, Har Gau and Niango. Before the Clone Wars, the Commerce Guild firmly held these population centers. What little corporate independence there was huddled in a few scattered townships founded by escaped workers and fugitive union organizers.

Felucia was a challenging world to colonize. Many of the indigenous plants aggressively defend themselves. Sharp barbs, shooting spores, and poisonous defenses scuttled early attempts at agriculture. Still, the Gossam colonists carved out a few footholds on the planet, exploiting its porous crust and expansive arterial network of underground and surface water circulating around the planet. This allowed modern water processing to be concentrated in several key locations, efficiently scrubbing the waters and ridding it of harmful, naturally occurring impurities.

When the Clone Wars erupted, Felucia was one of the first sites targeted by Republic crosshairs. A medical facility in Niango was found to be the source of biomolecules used in military nerve toxins. An elite team of ARC troopers destroyed the facility, but the demands of the war prevented an occupational force from staying on Felucia. Thus, the Guild still held possession of the planet after these initial stabs, though many of the cities showed signs of combat -- destroyed and damaged structures, frightened citizens and limited supplies. Shu Mai found that her retreat was no longer peaceful. Still, her stubbornness refused to let go of Felucia... not without having the Republic pay a dear price.

She engineered a spiteful contingency plan should Felucia ever fall. Natural toxins, harvested from Felucia's untamed wilderness, were refined and loaded into secret pumps in key locations in the water network. If released, they would quickly course through the water ways to poison all the cities of Felucia and the surrounding areas, making the planet a costly and deadly "prize" for the Republic.

During the Outer Rim Sieges, as Castell fell to the Republic, Shu Mai fled to Felucia. As a leader of the Separatists, she was targeted by the Republic, who were concentrating on taking down the Confederacy leadership. On Felucia, Jedi warriors Barriss Offee and Zonder went undercover, posing as relief workers. They failed to capture Mai, as they were discovered and imprisoned by Commerce Guild guards. The two Jedi were sent to the state-of-the-art Nigkoe detention facility.

Jedi General Aayla Secura and the 327th Star Corps of clone troopers were reassigned to rescue Offee. Secura's forces aboard the Venator Star Destroyer Intrepid stormed the world, cutting through its Separatist defenses. They liberated Offee, but the hunt for Shu Mai was still on. Little did the Jedi know that Shu Mai was not on the planet. They nonetheless carried out their mission, even though reports from Coruscant trickled in that the capital was under attack.

Prior to her departure, Shu Mai executed her contingency plan, releasing toxins into Felucia's far- reaching water table. The Jedi computer prodigy Ekria calculated that they stood a chance to stop the spread if they targeted the key pumping facilities in Har Gau, Jiaozi and Niango, so the Jedi teams separated to march overland through the dense underbrush to reach these heavily guarded sites.

It was during this mission the call came from Coruscant to execute Order 66. Clone Commander Bly carried out the order, ruthlessly killing Secura. Lieutenant Galle gave the order to open fire on Barriss Offee, killing her. The Padawans Ekria, Zonder and Drake Lo'gaan managed to escape the initial slaughter.

Once a major holding of the Commerce Guild, Felucia was a world teeming with fungal life-forms and immense primitive plants. Much of the planet has a fetid, humid landscape overgrown by forests of bizarre wilderness. Many of the life-forms on Felucia are partially or completely translucent; they color the sunlight as the beams penetrate their skin. Beneath the hazy canopies of the enormous pitcher plants and leafy growths is a surreal color-drenched landscape.

Near the end of the Clone Wars, Felucia was one of the key contested worlds during the Outer Rim Sieges. Jedi Knight Aayla Secura and Clone Commander Bly led the Star Corps of clone trooper infantry through the wild underbrush of the planet, searching out Separatists forces that lay in wait. It was not the Separatists that would seal Secura's fate, however. When Order 66 was enacted, Bly and his soldiers killed their Jedi leader as an enemy of Republic.