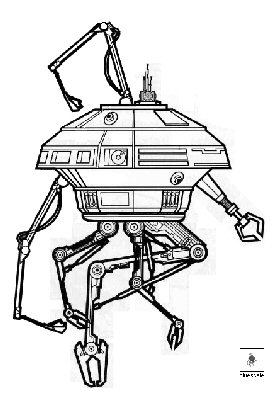 
Quote: "Unhand her you fiend! (blaster noises) You will never get away with this Doctor Moonkiller!"


Roll 1D to determine how many days before the droid drops out of the air for no apparant reason.

Roll 2D to determine how many days before the droid decides to do a header into a wall for no apparant reason.

Roll 3D to determine how many days before an arm falls off for no apparant reason.

Roll 4D to determine how many months before the droid hijacks a local radio station and broadcasts O-zone's Nuna-Nuna for no apparant reason.

Only speaks in sound bites from action b-holovids

Description: Made out of found junk and debris his crew mates had accumulated, Vratik'k'kitch, the insane verpine tech created the droid that would come to be known as "Kitch's Custom FUBAR droid thing." A largely useless droid, it did little. Trying to find a niche in the crew and make itself more useful, it took a number of correspondence courses, all of which were pretty much useless too. It left the crew for a limited period to pursue a career in Alderaanian Sea snake hairstyling, finding that such animals not only did not have hair but were now extinct with that whole Alderaan going boom thing, he rejoined the crew and is still pretty much useless.


Page designed in Notepad, logos done on Personal Paint on the Amiga.
Stats, Text and Image by Brandon Koller. Copyright remains with him.
Any complaints, writs for copyright abuse, etc should be addressed to the Webmaster FreddyB.