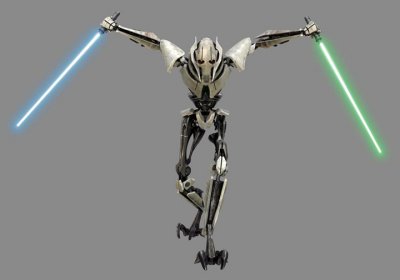 
When the greedy corporate titans and the disenfranchised systems of the galaxy pooled their resources together to leave the aging Galactic Republic behind, they became the Confederacy of Independent Systems. Their military assets formed a droid army of seemingly limitless size -- a weapon that needed a military mastermind to wield effectively.

From within the ranks of the Confederacy came General Grievous, a brilliant strategist unhindered by compassion or scruples. His lightning strikes and effective campaigns caused his reputation to grow in the eyes of a frightened Republic. To many, he eclipsed the threat posed by Count Dooku, the charismatic leader of the Confederacy's political battlefields -- Grievous was the face of the enemy.

A twisted melding of flesh and metal, General Grievous' body is a deadly weapon forged by the cutting edge developers of the Confederacy. Within the hardened carapace beats the heart of a remorseless killer. Grievous hunted Jedi for sport and proudly displayed his victims' lightsabers around his belt as trophies of his conquests. His unorthodox fighting form and mechanical enhancements gave him an edge in close-quarters combat, and his strategic ingenuity and flawless cunning rendered him almost invincible against the Jedi.

In the final stages of the Clone Wars, Grievous orchestrated a daring strike against the heart of the Republic. His flagship led a fleet of massive warships to Coruscant, where an immense battle raged in the upper atmospheres of the capital world. The fighting had gone on long enough -- one way or another, this strike would lay the foundation for the end of the war. Grievous was determined to be victor, and hoped to add the lightsabers of the most famous Jedi warriors -- Anakin Skywalker and Obi-Wan Kenobi -- to his grisly collection.

Though Grievous orchestrated many campaigns from sheltered bunkers, he was not afraid to fight alongside his soulless troops in the frontlines of the battlegrounds. Jedi General Daakman Barrek first reported Grievous' frightening form on the industrial world of Hypori, where Grievous laid waste to almost all of Barrek's forces.

Following that bloody debut, scattered reports along the HoloNet told of numerous successes in the Office of the General's campaigns against the Republic. Grievous led a stab into the Republic's inner systems along the Corellian Trade Spine, conquering world after world. When Duro fell to a concentrated Confederacy attack, the insulated Core Worlds trembled in fear of what the General was able to achieve.

Equipped With:
Four Arms: General Grievous' arms can split from their default configuration into a set of four arms which allow him to wield four weapons at once.

Ultrasonic Vocabulator: Grievous has a vocabulator system which can communicate into ultrasonics, allowing him to issue commands to droids unknown to organics.

Magnetised Talons: Grievous' feet end in a set of magnetised talons, which can magnetically adhere to metal surfaces such as starship hulls. The talons are also razor sharp (Strength+2D Damage) and can be used for climbing or gaining purchase on slippery or sheer surfaces. His feet can also be used interchangably with his hands, allowing him to walk on his hands while wielding weapons with his feet, or to stand on a single foot while wielding weapons in his hands and other foot.

Heuristic Combat Programming: Grievous' brain is enhanced to allow him to control his cyborg body, as well as to allow him to combat his chosen enemy, the Jedi. This programming allow him to wield four weapons at no disadvantage (first four actions are taken at no penalty), making him a fearsome warrior.

Cybernetically Enhanced Eyes: Although Grievous has his natural Kaleesh eyes instead of photoreceptors, these are enhanced, allowing him to see in the dark (+2D to search in darkness), and including macrobinocular features.

Armorplast Plating: Grievous is covered with armour plates, making him heavily resistant to damage (+1D vs Damage) although obviously even this is not enough to make him totally resistant to a Lightsaber wielding Jedi Knight.