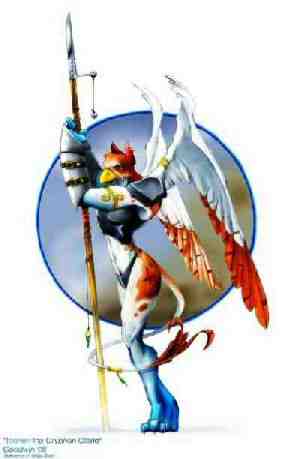 
The Griphyn are an Avian species who retain a set of powerful wings although they mainly resemble humanoid species having the normal two arms and two legs. Although they only reached the space age relatively recently, they have managed to colonise several planets in their own and nearby star systems. They have a trusting nature and have difficulty recognising lies, and were therefore easy pickings for the Empire when they arrived and were introduced to high technology and the galactic community.

The deception of the entire species continued for many years, and the Griphyn were exported in their thousands as slaves, seen as gullible by their Imperial masters. However although the Griphyn may be seen as overly trusting by most other species, they are not stupid and soon realised that they were being taken advantage of and started contact with the Rebel Alliance. The Griphyn aided the Alliance covertly, which was repaid by the Alliance helping free the Griphyn's homeworld shortly after the establishment of the Alliance of Free Worlds.


Flight: The Griphyn are winged and are capable of flight, capable for flying at the speed given below in their move.


Trusting: Griphyn are naturally trusting and have difficulty believing that someone is lying to them, although other species can easily point the deception out, however they must make a successful Moderate Knowledge roll to recognise a lie for themselves.

Rebel Supporters: The Griphyn became aware of their betrayal by the Empire, and began almost species wide support for the Rebellion. This is common knowledge across the galaxy, and they are seen as Republic Lackeys by some species and planets.