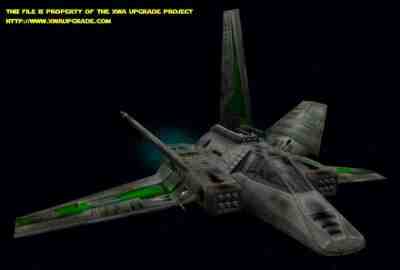 Description: The Imperial Gunboat is a heavy fighter designed to match the Rebel X-Wing and Y-Wing fighters, and has a heavy load of weapons capable of reducing most targets to scrap. Although later fighters such as the TIE Advanced and TIE Defender also filled this role, the Gunboat was an earlier attempt at taking the rebels on at their own game, and in many ways is a better all round fighter than its replacements. The Gunboat was evolved from the Lambda Shuttle design, although its five wings do not swivel for landing like the Lambda, and the design was eventually retired to make way for TIE variants which matched the Imperial design ethos better than this fighter. The Gunboat was sold to some non-Imperial concerns, although these were always allied closely with the Empire, and has been found in limited numbers on the open market where this heavy fighter is always snatched up for its high speeds, manueverability and heavy weapons.