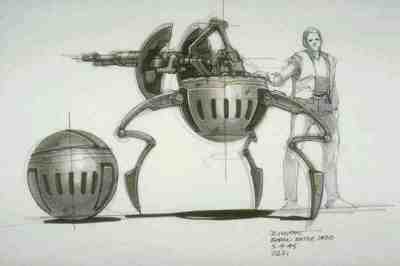 Description: The Heavy Droideka was a small production run combat droid built around twin heavy repeating blasters, and was so powerful that it could knock out speeders and light walkers with relative ease. The concept was similar to the standard Droideka, except that the droid could fold into a small globe to move at speed instead of a wheel. Tough, heavily armed and armoured but not terribly smart or good at dodging, therefore their ability to withstand enemy fire and hand out a lot of firepower in return was needed to compensate for the fact that they made obvious targets and made common tactical flaws. Heavy Droideka's are rare on even the black market and are snapped up quickly due to their obvious ferocity in combat, restrictions on combat droids and heavy weaponry mean that ownership of such a droid is extremely illegal and carries high sentencing throughout the majority of the galaxy.


Page designed in Notepad, logo`s done on Personal Paint on the Amiga.
Text completely by FreddyB. Image is by Lucasfilm and copyright resides with them.
Any complaints, writs for copyright abuse, etc should be addressed to the Webmaster FreddyB.