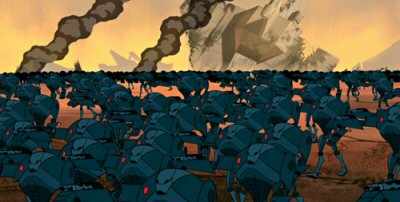 
After the Battle of Naboo, the Republic passed strict laws that severely hampered the manufacture and distribution of battle droid armies. Massive corporate entities like the Trade Federation appeared to comply with the new legislation, shutting down numerous factories within the Republic borders. In truth, they simply moved the bulk of their operations to worlds outside the Republic's jurisdiction, continuing their work in secret.

Geonosis was one of the largest of these covert foundries. The nearby world of Hypori was another. A temperate world rich with minerals, Hypori has no intelligent life. The leaders of the Baktoid Armor Workshop sponsored a colonial effort, transporting an entire Geonosian hive to Hypori. Though the tough bedrock and soil proved difficult to assimilate into a true and proper hive-mound, the Geonosian workers nonetheless turned the planet into a massive foundry, churning out battle droids in preparation for the war to come.

Jedi Master Daakman Barrek discovered the foundry during an intelligence-gathering mission with his Padawan Sha'a Gi. The two reported it into Coruscant, who dispatched an elite Jedi taskforce complete with clone trooper infantry to destroy the facility. Disguised orbital mines crippled much of the taskforce before it even made planetfall.

On the surface, the Separatist military commander, General Grievous, led the battle droid army that destroyed what remained of the taskforce.