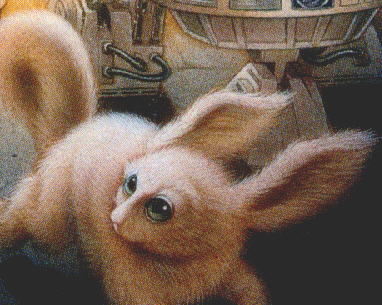 SPECIAL ABILITIES
Nimble: Kushiban gain a +1D bonus to Climbing/Jumping skill checks that involve jumping or leaping, as well as a +1D bonus to all Dodge skill rolls.

Story Factors:
Cute Appearance: Kushiban are perceived by many species to be cute and cuddly. This leads many to think of them as helpless, or mistake them for pets or vermin.

These are the known powers Ikrit possessed and it is believed that he had access to other powers.


The half-meter-tall, white-furred, floppy-eared creature known as Ikrit was originally believed to have been the pet of Anakin Solo, discovered in the jungles of Yavin IV. It was only later, after solving the puzzle of the Golden Globe with the help of Anakin and his friend Tahiri Veila, that Ikrit showed what he really was: an ancient Jedi Master. Ikrit is of the species Kushiban.

Four hundred years before Anakin came to the Academy; Ikrit came to the moon of Yavin IV and discovered the Golden Globe. Unable to break the curse, he waited until someone came along who could, which happened to be Anakin and Tahiri. Ikrit was trained by Master Yoda himself. Ikrit kept his true identity secret from but a few people, with the exception of Tionne, Uldir, and Anakin and Tahiri. He shared his knowledge with them and whenever possible, such as during their many adventures, helped train Anakin, Tahiri, and Uldir.

When the Peace Brigade and the Yuuzhan Vong attacked Yavin IV, Ikrit helped Tionne and Kam Solusar hide the trainee children from them. Ikrit went back to help Anakin defend the Great Temple from the attackers. He discovered that Tahiri, Sannah, and Valin Horn had stayed behind to help them. After stealing a Brigade shuttle and kidnapping the pilot, the group tried to make its escape. However, in the attempt a group of Brigade ships tried to stop them. Ikrit jumped out of the ship to drive them back and draw their fire. His gambit was successful, but cost him his life.