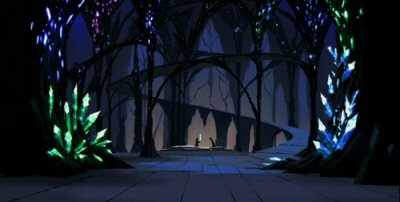 
Concealed within the caverns of a frigid, mountainous world of Ilum are precious crystals that form the heart of the Jedi lightsaber. From the most ancient days of the Jedi order, initiates have journeyed to Ilum to find the crucial components for their weapons.

Among the endless icy mountains is Ilum's Crystal Cave. The Force permeates this grotto, and visions of possible futures often come to the Jedi that venture into the darkness. Ancient intaglios depicting the history of the Jedi order are carved in the cavern walls.

Ilum crystals were the natural minerals used most often in the oldest lightsabers. These crystals spontaneously emit powerful bursts of light and energy when resonant frequencies are run through them. Unlike other lightsaber crystals found elsewhere, the gems harvested on Ilum only produce blue and green blades.

During the Clone Wars, the Separatists sought to strike at the Jedi by destroying their sacred crystal caverns and surrounding temple on Ilum. Mine-laying chameleon droids were dispatched to demolish the caves with explosives. Though Luminara Unduli and Barriss Offee managed to hold off the droids for a while, they soon needed reinforcements. Help arrived in the tiny form of Jedi Master Yoda, who together with Padmé Amidala were able to thwart the destructive Separatist attack.