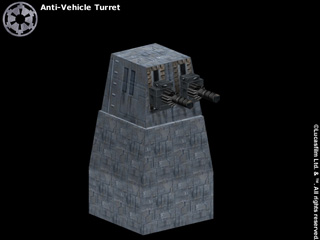 Description: A more permanent type of defence for Imperial bases and installations, the Anti-Vehicle turret is a scaled down version of the Turbolasers mounted onto Imperial Star Destroyers and Imperial Space Stations. The Twin Turbo Lasers are backed up by powerful targetting systems in this heavily armoured 8 meter tall turret, and are capable of taking out walkers and speeders in defence of the base. The turret is capable of firing in a 360 degree arc, and although built as a prefabricated module, this tower takes a skilled team days to assemble and connect to power systems. When used in concert with other defence systems, this tower provides the middle layer of defence, capable of damaging walkers, totally destroying speeders, but only scratching starfighters and it is nearly incapable of hitting smaller targets like troops or nimble speeders. Therefore in a fully integrated defence system, these towers are backed up by lighter anti-infantry systems, and more powerful anti-starfighter and anti-capital ship weapons.