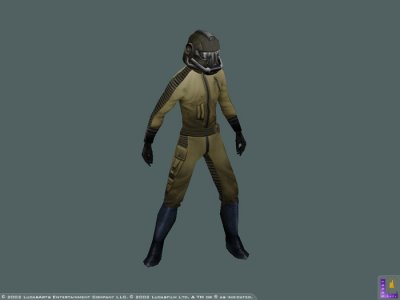 
Imperial Worker Wearing radiation suits to protect themselves from the various dangers of their jobs, the Imperial workers keep the Remnant functioning in its day-to-day operations. From fixing machinery to building equipment, the workers are highly skilled in their personal duties.

Armed with Blaster Pistols for self defence, these workers are more trusted and more loyal than the indentured workers that do most menial work for the Galactic Empire. Imperial Workers work in sensitive installations, and will fight in defence of the Empire against infiltrators and saboteurs if necessary.
Dex: 2D
Blaster; Blaster Pistol: 5D
Brawling Parry: 3D
Dodge: 4D

Page designed in Notepad, logo`s done on Personal Paint on the Amiga.
Text by FreddyB and LucasArts, Stats by FreddyB. Image is by LucasArts, copyright resides with them.
Any complaints, writs for copyright abuse, etc should be addressed to the Webmaster FreddyB.