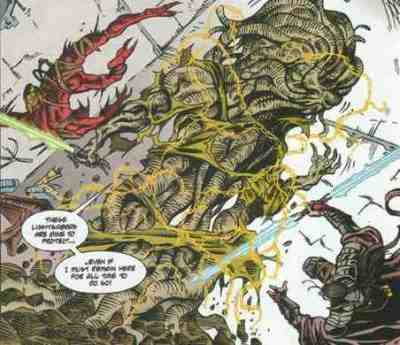 Jedi Master Inam Bnar is a Neti (although the species is also called Ryyk by some sources) who is related to Jedi Master Odd Bnar (from Dark Horse Comics "Dark Lords of the Sith" and "Empires End" series). The Neti are intelligent trees, and although they have a mobile period of their life, during which they have a similar mobility to humanoids, they later put down roots and become immobile so they can continue their lifecycle. He has now entered the second part of his life cycle, and has put down roots and become immobile, he has been in this form for almost 5 thousand years, and although his species live for many thousands of years, he is unusually old even for them, but many Jedi live for far longer than their species usually do, and this has just become magnified by the Neti's already long lives.

Inam was already over a hundred years old before he became a Jedi, but this was still young for his species, and did not accept advancement to being a Jedi Master until he was over five hundred years old, as he felt that taking the rank was putting himself above others. Even after becoming a Jedi Master, he avoided being stuck as a teacher at the Jedi Academy, which at that time was on the world of Ossus, preferring to be out among the stars helping people, and protecting the Republic.

When rumours started to be heard about the Sith, Inam was worried, because at over 1,500 years of age, he was one of the few who really knew much of the legends of the Sith, combined with the fact that he was slowing down as he approached the second part of his life. So when the opportunity to join a research project to help defend against the Sith, he was happy to be assigned, and joined the flight aboard "The Sword of the Jedi" out to the planet of Illeigh, a jungle world.

After the base was established, the research work began, as did the wait for the return of "The Sword of the Jedi", but after years of waiting it became clear that no one was coming to bring supplies or help for the base. The members of the base changed from research to survival, which was made fairly easy by the bountiful jungle that they were surrounded by. As the years passed, the human Jedi in the research team married and had families, but there were not enough of the Alien members of the team to continue their species on this world. So although the numbers remained fairly constant at about 300, the alien quantity of the group was reduced by natural deaths until only Inam remained.

After five hundred years, Inam finally put down his roots, remaining a teacher to the Jedi decendants of the researchers, but even his training did not stop the villagers starting to think of him as some kind of god, although he himself just thought of himself as some jind of village wiseman. Over the following five thousand years, he taught each generation of villagers on Illeigh to use their innate force skills, developing new ways of using the force.

Inam Bnar is a pacifist by nature, and has not passed on training in Lightsaber combat, or any of the Jedi arts of war to the villagers in his care. Since the Sith have arrived, he has been using his Jedi powers to hide the villagers from the Sith and Massassi, which has been fairly easy since the low technology of the Villagers doesn't show up on the scans of the Sith ships, combined with the fact that the Sith were not expecting to find anyone on this world.

When he finds out about the situation with the Jedi and the Republic, Inam Bnar will want to help train new Jedi, and although he will still be somewhat reluctant to train warriors. The villagers will also want to become warriors for the republic, and will want be trained as Jedi. No matter what Inam wishes, he cannot move or be moved, so trainee Jedi will have to come to Illeigh, meaning that the Sith presence will have to be removed as well.


Page designed in Notepad, logo`s done on Personal Paint on the Amiga.
Text completely by FreddyB. Image is by Dark Horse comics, and remains copyright of them and LucasFilm.
Any complaints, writs for copyright abuse, etc should be addressed to the Webmaster FreddyB.