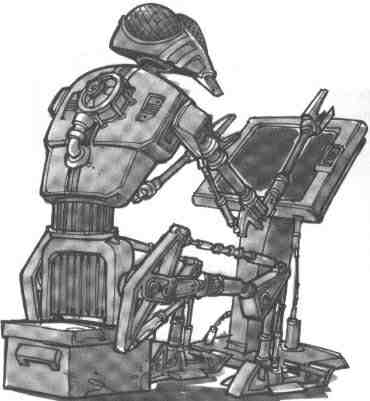 Description: The J9 Worker Drone was built by the Verpine of the Roche hive, and resembles a stretched out preying mantis. The insectoid look to this droid made it unpopular with the majority of mammalian species in the galaxy, and the production run was therefore fairly short as sales failed to materialise. The Worker drone name was unfortunately taken literately when the droids were sold off at discounted prices, and most of the droids have ended up working in factories and loading facilities, a pity given that they are as advanced and intelligent as protocol droids, and have a wide variety of skills. The Arjan vocabulator system used in these droids is keyed to the frequencies used by Verpine and many other insectoid species, making the droids voice somewhat "bussy" but still easily understandable in all of the 1 million + languages that the droid speaks.


Page designed in Notepad, logo`s done on Personal Paint on the Amiga.
Text completely by FreddyB. Image is by Bill Hughes and copyright resides with him.
Any complaints, writs for copyright abuse, etc should be addressed to the Webmaster FreddyB.