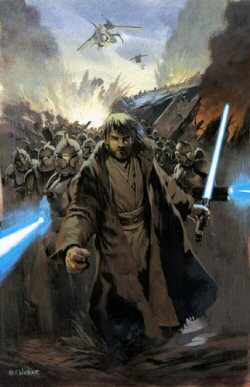 
Jabiim was a world that the Republic ignored until it was too late. The world had been part of the Galactic Republic for 3,000 years. It had paid its due taxes to Coruscant, but remained undefended when calamity befell it. The scourge of Brainrot Plague decimated the populace. Garrulous Trandoshan bandits invaded and occupied their lands before moving on. Lythian Pirates besieged their small communities. Each time, the Jabiimites had to defend themselves.

It came as little surprise, then, that the majority government of the Jabiim Council chose to side with the Confederacy of Independent Systems in the Clone Wars. Though there was a vocal loyalist contingent within the government, the charismatic Alto Stratus became the popular leader of the Jabiimite secessionist movement. He cited the past record of Republic apathy to fuel public support. He called upon the Jabiimites to pick up arms against the Republic.

Negotiations spearheaded by the Alderaanian Diplomatic Corps were rebuffed. Jabiim was gearing towards war. The Republic positioned their forces on nearby Handooine, ready for the strike. General Obi-Wan Kenobi was named theater commander for the campaign. Jabiim was a world rich with valuable ores -- raw material that could not fall into Separatist hands.

Jabiim is a world deluged by torrential rains. It experiences less than five days per standard year without precipitation. Its muddy surface is constantly shifting from the weight of the rains. The battlefields of Jabiim were arduous, and combatants would have to contend with the inclement conditions. The Republic could not count on air support due to electrically charged atmospheric disturbances. They instead relied on AT-XT, AT-TE and AT-AT walkers as the bulk of their mechanized assault.

The Jabiimites, having lived amidst the rain and mud, were much better suited for combat. Alto Stratus' elite guards, the Nimbus, wore specialized repulsorlift skates that allow them to glide across the molasses-like mud. This gave them a considerable edge in the combat that followed.

Supplied with armor and combat droids by the Confederacy, the Jabiimites were able to destroy the Republic's Shelter Base in the second week of hostilities. General Obi-Wan Kenobi was, for a time, believed to be killed in the attack. His apprentice, Anakin Skywalker, had to lead a group of similarly "orphaned" Padawans in an attack against the Jabiimites.

Though Stratus was ultimately defeated, his fiery rhetoric had leaked to the HoloNet, and the Confederacy spread his infectious words to many planets, further fomenting secession and rebellion.