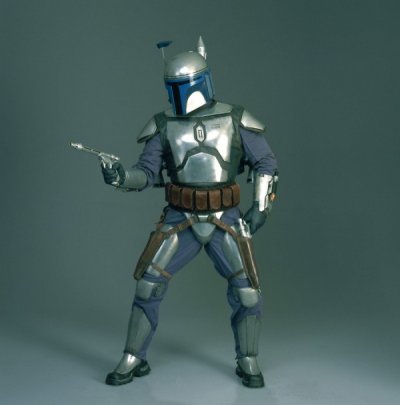 
Jango Fett was orphaned at an early age, the son of simple Concord Dawn farmers killed by brutal marauders. At the age of ten, he was picked up by Journeyman Protector Jaster Mereel, who introduced Fett to a harsh world of mercenary life. He was raised among great warriors, learning to survive in the rugged frontiers. Though the Mandalorian supercommandos were wiped out by the Jedi Knights, Jango was one of the few left to still wear the armor.

Years of physical conditioning and training honed him into one of the most feared bounty hunters in the underworld. Not even Black Sun Vigos were safe from his dual blaster pistols. On occasion, Fett would tangle with Zam Wesell, as their talents would overlap on similar assignments. Though he preferred working solo, the two teamed up when it was prudent. The two shared a misadventure in tracking down a rare artifact from Seylott, which granted its user incredible power.

Fett all but disappeared from bounty hunting circles as he took time to raise his son. He sought to experience what his life might have been like had he been raised by a caring guardian. Still, if the credits were right or the challenge appealed to him, he would don his battle armor periodically and venture from his hiding place.The name Fett carries with it a cold air of dread and competence. To those with the credits to hire him, it is synonymous with success. To those with reasons to fear, Fett means capture or death. The name and reputation are just two of the many things Boba inherited from his father, Jango. In the final years of the Republic, Jango Fett was regarded as the best bounty hunter in the galaxy.

A proficient marksman and unarmed combatant, Fett was covered in a sleek armored suit that concealed his scarred visage and strangely tattooed forearms. His combat gear featured an arsenal of weaponry, including retractable wrist blades, a snare, dual blaster pistols and other more exotic tools of the trade.

In combat, Jango used his harnessed jetpack to gain the advantage of speed and height over his enemies. The backpack also carried a nasty surprise -- an explosive rocket could be launched from it. For interstellar travel, Jango traveled aboard his well-worn starship, Slave I.

About a decade prior to the outbreak of the Clone Wars, a man named Tyranus approached Jango on the moons of Bogden with an intriguing proposal. In exchange for a sizable fee, Jango would become the template of a clone army. Fett agreed, but with an unusual stipulation in his contract. In addition to his fee, he would be awarded an unaltered clone of himself. Unlike his other duplicates, this clone would not undergo growth acceleration or docility tampering. It would be a pure replica of Jango.

The Kaminoans provided Fett with private accommodations in their hermetic Tipoca City, and Jango dropped out of the bounty hunting limelight. He concentrated on teaching his son, the unaltered clone he named Boba, the ropes of survival and combat while the Kaminoans extracted genetic material to build thousands of clone soldiers.

While serving as Tyranus' enforcer, Jango was approached by Viceroy Nute Gunray of the Trade Federation. Gunray wanted to eliminate Senator Padmé Amidala, who had long been a thorn in the Viceroy's side. Fett subcontracted the job to an assassin named Zam Wesell, and armed her with poisonous kouhuns to finish the job.

A pair of meddling Jedi got in the way of the hit, and Jango was forced to kill Zam lest the trail lead back to him. Fett hadn't counted, though, on the resourcefulness of Obi-Wan Kenobi. Jango had used an exotic weapon, a Kamino saberdart, to eliminate Zam. No one should have been able to trace that weapon back to its source, but Obi-Wan's underworld contacts were able to point him in the right direction.

Kenobi arrived on Kamino, and learned of the clone army. He met Jango, and the two had a tense, yet civil, discussion, neither revealing their true motives. Fett nonetheless decided to flee, and ordered Boba to gather their belongings. Kenobi, working on orders from the Jedi Council, attempted to apprehend Jango just prior to Slave I's lift-off, which led to a water-logged melee atop the rain-swept landing platforms of Tipoca City. Jango escaped aboard the Slave I, and he and his son journeyed to Geonosis, to reunite with their mysterious benefactor, Lord Tyranus.

En route to Geonosis, Jango and Boba realized a homing beacon was placed aboard their vessel, and found a pursuing Jedi starfighter on their tracking screens. The tenacious Obi-Wan Kenobi was back, and a daring game of cat and mouse played out among the rocky debris of the Geonosian rings. Despite the barrage of Slave I's seismic charges, laser cannons and missiles attacks, Obi- Wan survived and continued shadowing the Fetts as they arrived on the barren planet's surface.

Kenobi and his compatriots were captured on Geonosis, which was revealed to be a Separatist stronghold. They were to be executed in grand Geonosian fashion, but their deaths were stalled by the sudden arrival of Jedi reinforcements.

Tasked with protecting Lord Tyranus, Jango entered the fray against the Jedi. His blaster skills killed several Jedi, but Jango was not quite prepared to face off against Jedi Master Mace Windu. Windu did not break stride as he deflected Jango's incoming blasts and swiftly cleaved off the hunter's head with a single stroke of his luminescent blade.

Jango's battle-dented helm bounced along the dusty ground of the Geonosian arena, to be picked up by a stunned and newly orphaned Boba Fett.