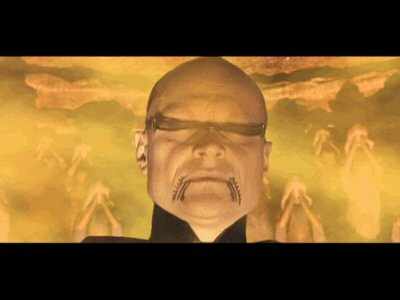 SPECIAL ABILITIES
Force Sight: Miraluka rely on their ability to perceive their surroundings through the slight Force vibrations emanated from all objects. In locations where the force is somehow cloaked, Miraluka are effectively blind.


Physically blind, he perceives the world around him thanks to the Force, similarly to Darth Traya (he is able to do this because he is a Miraluka, same as Visas Marr). Serving the Galactic Empire and the murderer of Morgan Katarn, after the fall of Palpatine his goal was to absorb the power of the Valley of the Jedi and begin a new Empire. However, Kyle Katarn, after fighting and defeating his six henchmen, stops him before he achieves his aim and defeats him in an epic lightsaber duel inside the Valley's inner sanctums on the planet of Ruusan.

Jerec was trained by Palpatine under Darth Vader along with a number of other dark students in an attempt to ensure the dark side's reign over the galaxy should anything happen to either Vader or Palpatine. Jerec often studied from one of the Emperor's many Dark side texts, the enormous Dark Side Compendium (which Luke Skywalker would later study from at the tutelage of the reborn Emperor, on Byss). In this malevolent tome, Palpatine mused about a proposal he never actually had time to test: he would take 7 or so trained Dark Jedi, and submerge them utterly into the Emperor's evil will; they would be fanatical, absolutely loyal, nearly unstoppable servants- a Dark Side Elite. But Palpatine never carried it out fully (he did use Battle Meditation to achieve a weak form of this however). Jerec determined to pick up where Palpatine left off- unfortunately for Jerec, Palpatine sensed his intent. Whatever the truth of the rumors of Jerec being an Emperor's Hand, Palpatine was always wary and deeply fearful of possibly being overthrown; he ruthlessly blocked Jerec from further access to his Dark side corpus, or indeed, any advanced training at all. After Palpatine's death at the hands of Vader, Jerec took his chance and aimed for his goal, completing his experiments and binding the minor characters Boc, Gorc, Pic, Maw, Sariss, Yun.

Jerec originally came to the attention of Jocasta Nu, a Jedi who worked for the Jedi ExplorCorps as a talented Force-sensitive; she immediately took him on as a Padawan. Nu's training gave Jerec several traits, not least among which was an insatiable hunger for knowledge, and supercilious manners. He advanced to Knighthood, and took on Ameesa Darys as his own Padawan- soon she became a Knight herself, and Jerec a respected Jedi Master. His thirst for knowledge unabated, and unsatisfied by the resources available a Jedi Master, he sought outlets for his curiosity. He sat out the Clone Wars and instead travelled with a group of Jedi 'artifact finders' to the Unknown Regions, supposedly in search of wisdom unknown. But the rise of the Empire meant that that couldn't last; events caught up with Jerec in the form of the Imperial Inquisitor Tremayne, who brutally slaughtered his fellow Jedi, with Jerec the sole survivor- due to his decision to join the Dark-siders as an Inquisitor himself.

Jerec continued his studies, but this time in the Dark side. Eventually, he would learn from the Dark side prophet Lord Cronal (father of Sariss and later known as the Prophet Blackhole) of the Sith legend of the Valley of the Jedi. The lure of the concentrated power, and more importantly, the knowledge of thousands upon thousands of the greatest Sith and Jedi of antiquity proved too much for Jerec to ignore. But he could not immediately go in search of it due to his duties and the ever- present gaze of the Emperor. Jerec instead busied himself with projects such as governing Sulon (by an interesting coincidence, Kyle Katarn's homeworld), having a personal Super Star Destroyer built to replace the Imperial Star Destroyer Vengeance which was lost in an attempt to capture and tame a mind-controlling monster called Spore, in order to control an army. Jerec was not busy solely with ruling, recruiting Dark Jedi, and more esoteric pursuits; he also prudently keep his hand in at business, becoming a billionaire through savvy investments, and many wealthy backers such as Grand Moff Ardus Kaine (they backed him financially due to his ability to Inquistorially exempt his patrons from any and all audits). After Endor, when Kaine formed the Pentastar Alignment, Jerec and his followers went to work for the Alignment as the Great InQuestors of Judgment. Only a year later, the Prophet Blackhole (formerly Lord Cronal) came to the Pentastar Alignment, and informed Jerec that the Emperor was alive and well on Byss, his plans for transferring his consciousness into clone bodies a success. Further, the Emperor, through Blackhole, commanded his allegiance, and charged him to search for the Valley of the Jedi, for the betterment of the Empire. Jerec, cleverly, had already arranged for the Alignment to dispatch him on that mission. But playing two sides against the middle was not sufficient for him- the Prophets of the Dark Side wanted him to find the Valley as well! 20 years previously, Jerec had captured the Jedi Master Qu Rahn and when he failed to get the coordinates, and when Rahn snatched Yun's lightsaber and rashly took on all seven Dark Jedi, executed him. Jerec had forced his way into Rahn's mind however, and learned that Morgan Katarn was the only other person who knew where the Valley was. After killing Morgan in anger, Jerec would be forced to wait a years before a information broker he hired, a droid named 8t88, provided him with the location via a map. En route, he lost all his followers to Kyle Katarn, but backed by three major factions, he did indeed gain entrance to the Valley. Drawing upon the stored Force energies, Jerec realized all the wildest promises of the Valley:

and for one lucid moment, absolute omniscience was his. The will of the Force, Chaos, the ancient civilizations of the Rakata and Xim, what lay beyond the galactic barrier, and the origins of the universe - - Jerec understood them all, and endowed with Force powers beyond imagination, he would have ruled accordingly.

His megalomanical plans would be defeated when Katarn, drawing on the same Jedi techniques that severed the Jedi Exile from the Force, or Ulic Qel-Droma, cut him off from the Valley and indeed, the Force at large. Kyle Katarn then remorselessly cut down his father's murderer, sending his soul screaming towards the abyss of the Dark side.


Page designed in Notepad, logo`s done on Personal Paint on the Amiga.
Stats by FreddyB. Descriptive Text and Image is from Wikipedia, copyright resides with LucasFilm.
Any complaints, writs for copyright abuse, etc should be addressed to the Webmaster FreddyB.