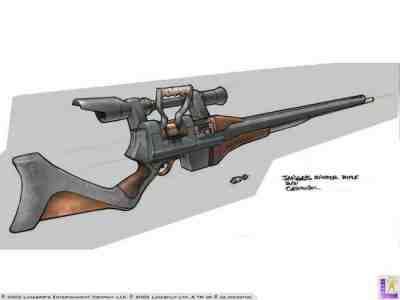 * - Although the Saber Darts themselves cause little damage, they are used to deliver toxins, the standard toxin used of Kaminoan Saber Darts does 8D damage and takes effect in mere seconds, although tranquilisers and other chemicals can be used instead.

Description: The Kaminoan Saber Dart Gun, is a hunting weapon from the planet Kamino, and fires small darts coated with toxic chemicals. Used by the Kaminoans to hunt underwater because of the unreliability of blaster weaponry in that environment, they have become popular off-world, although very hard to get hold of. The high cost of using a Saber Dart Gun, doesn't deter the Bounty Hunters who love the flexibility and accuracy of this weapon, and although the Kaminoan Dart Toxin is a dangerous chemical, many users of this weapon love to make their own, to allow them to take down especially dangerous opponents.