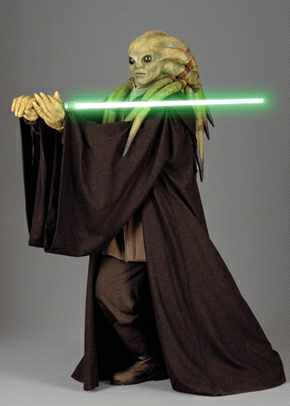 Low-light Vision: A Nautolan can see twice as far as a normal human in poor lighting conditions.

Pheromone Sense: Nautolans possess tendrils which act as their major sensory organs, and they barely function outside of water. The tendrils are so sensitive that they can sense odors and pheromones, which can allow an observant Nautolan some idea of a target's emotional state. Because of this, Nautolans gain a +1D+1 bonus to all skills rolls involving social interaction (i.e. Bargain, Command, Con, Intimidation, Investigation and Persuasion) when in water. When out of water, this bonus is reduced to a mere +1 pip.

These are the known powers Kit Fisto possessed and it is believed that he had access to other powers.


At its height, the Jedi order encompassed hundreds of different species, all strong in the Force. Kit Fisto is a striking example of an alien Jedi, with large, unblinking eyes, and a gathered tangle of flexible tentacle-tresses extending from his head. The mighty warrior not only advised the highest office of the Republic, but was also part of the Jedi taskforce assembled by Mace Windu to rescue captives from the Separatist stronghold on Geonosis. Fisto fought well against the Geonosian and battle droid forces, being one of the few Jedi to survive the extended melee within the carved walls of the execution arena. When Republic reinforcements arrived to spark the first battle of the epic Clone Wars, Kit Fisto led a special unit of clone troopers into the thick of the conflict.

An amphibious Nautolan from the Sabilon region of watery Glee Anselm, Kit Fisto had head tentacles that contained highly sensitive olfactory receptors, allowing him to detect pheromonal expressions of emotion and other changes in body chemistry. Fisto could live in air or in water. He was an extremely powerful swimmer, and honed his Jedi abilities to take advantage of his aquatic origins. He had perfected difficult Force techniques that manipulated the movement of water for defensive or offensive use.

A Jedi Master of renown, Fisto served as mentor to the Mon Calamari pupil, Eerin Bant, former Padawan of the late Master Tahl. Fisto was also co-leader of a Jedi task force that saw the vanquishing of the Iridium pirates in the Atrivis sector. During the Clone Wars, General Kit Fisto's aquatic prowess led to his command of the Mon Calamari campaign. He led local Mon Cal forces partnered with Republic clone sea troopers in battling the Separatist-backed Quarren Isolationist League. Fisto would later be involved in engagements on Devaron and Ord Cestus.

Though a radical combatant with unorthodox fighting methods, Fisto is conservative-minded when it comes to galactic politics. His close friendship and concern for fellow Jedi Aayla Secura occasionally pressed against the rules against attachment. They shared a deep respect for one another that, had they been outside the Jedi order, perhaps may have evolved into something else.