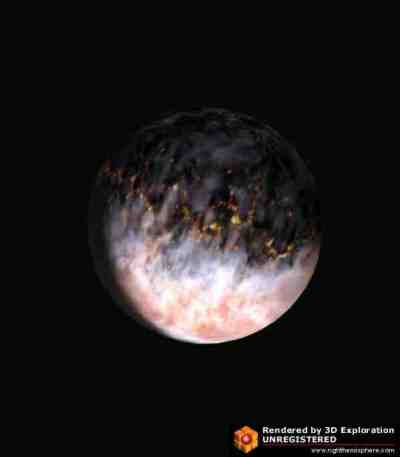 
Korras is one of three planets in its system, along with a gas giant and a small uninhabitable rock, whatever life inhabited this world before the Sith arrived has now been long since wiped away.

The Sith arrived here while they were fleeing the Old Republic many thousands of years ago, their colony ships landed and made the planet forever theirs. The Dark Side influence of the Sith and their servants has corrupted and killed off whatever one dwelt here, and the planet now requires massive oxygen recycling plants to keep its atmosphere survivable, however a thousand years and more of heavy industry and massive mining and dumping of toxic waste has left the atmosphere thick and choking, and when it rains (which it seems to constantly), the rain is toxic and acidic burning the skin of the unprepared.

Most of the planet is covered with huge city sprawls, but unlike the advanced cities of Coruscant and Kuat, these cities are smaller and crumbling, which inspire none of the awe that the higher technology worlds of the galactic core do. These cities are just slums into which the Massassi slaves of the Sith are crammed as the work away producing the machinery needed to keep the Sith Empire running smoothly.

However here and there are the Sith Temples, massive dark towers, enchanted by the power of the Sith Sorcery to resist the toxic rains, and to defy the laws of nature as the twist towards the stars. The Temples are the homes of the Sith Acolytes, where they recieve their training and indoctrination into the ways of the Dark Side.

The rest of the planet is toxic deserts, where not even the toughest of the Massassi enchanted and mutated by the Dark Side could survive without adequate protection.

Force users approaching Korras, instantly pick up the Dark Side influence around it, a dirty dark blotch in space not only from the Dark Side use upon it, but from the corruption and centuries of slavery and destruction which has taken place here.

Page designed in Notepad, logos done on Personal Paint on the Amiga.
Text completely by FreddyB. Image is from freespace.volitionwatch.com Copyright resides with the Artist.
Any complaints, writs for copyright abuse, etc should be addressed to the Webmaster FreddyB.