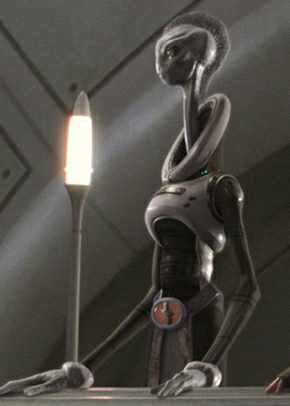 SPECIAL ABILITIES
Ultraviolet Vision: Kaminoans can see into the Ultraviolet spectrum, giving them an enhanced range of vision in conditions that other species would consider too dark to see clearly. This means that Kaminoans gain no penalties from Low Light conditions, although Pitch Black conditions effect them normally.


A tall, lithesome alien, Lama Su is the Prime Minister of the storm-shrouded planet Kamino. Commissioned by an enigmatic Jedi Master named Sifo-Dyas, Lama Su developed an impressive clone army of thousands of troops. Far removed from galactic affairs by virtue of Kamino's remote location, and the natural Kaminoan predilection for isolation, Lama Su never questioned the role of the army or its eventual use in the Clone Wars. He simply took great pride in the skills displayed by those in his employ.

Lama Su is the head of the ruling council of Kamino colony governors. As such, he is one of the few Kaminoans to deal directly with outlanders, but it has hardly made him worldly. He recognizes the importance of cloning to Kamino's economy, and took it upon himself to personally give visiting Jedi Obi-Wan Kenobi a tour of the facility. His unfamiliarity with human behavior and his eagerness to impress his client caused him to overlook his Jedi guest's apparent ignorance of the cloning project.


Page designed in Notepad, logo`s done on Personal Paint on the Amiga.
Stats by FreddyB. Descritive Text and Image is from StarWars.com, copyright resides with LucasFilm.
Any complaints, writs for copyright abuse, etc should be addressed to the Webmaster FreddyB.