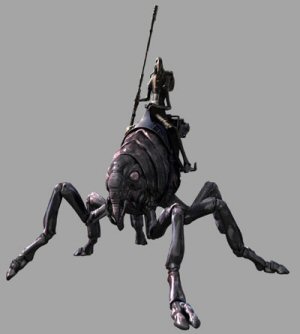 Special Abilities
Heat Resistant: Mustafar Lava Fleas are agile and heat resistant creatures, their rapid leg movement and crystalline armour allows them to resist the heat of walking over molten lava. For damage resistance rolls for heat damage from walking on lava, Lava Fleas triple their strength, for resistance rolls for resisting heat damage they merely double their strength.

Description: So simple and dismissive is the name lava flea -- a name given it by outlanders since the native term is completely unpronounceable to most humanoids -- that few would guess that this creature opened up the world to the Mustafarians.

Like the sentient Mustafarians, the lava flea evolved underground, in the cooler hollows of geologically dormant mountains. The lava flea life cycle begins in a larval state, as worm-like borers with crystalline exoskeletons. These writhing worms, about half-a-meter in length, gobble up mineral rich rock-dust from inner caverns, using acidic enzymes to break down the rock into needed nutrients. Within a year, these worms grow to almost a full meter, and encase themselves inside a hard crystalline cask to pupate. Within a month, they emerge as a six-legged flea.

Young lava fleas are only a meter tall at first, but by feeding on soft rocks, they are able to metabolize nutrients directly from the cooling lava through an armored feeding tube. As they grow, they molt, shedding aside their protective shells. The native northern Mustafarians used these discarded shells as armor when they took their first tentative steps beyond their sheltered caves. The insulation and armor offered by the shells allowed the Mustafarians to explore the surface. By domesticating the highly mobile creatures, the Mustafarians began to expand their domain.

Despite their bulky appearance, lava fleas are agile. They are light enough to walk atop a fragile cooling crust of a slow lava river, and their powerful legs can leap up to 30 meters in a single bound, completely clearing more active lava flows.

Though modern technology has come to Mustafar courtesy of the Techno Union and the Galactic Empire, the Mustafarians, for the most part, eschew the mechanical repulsorlift conveyances preferred by offworlders. They trust the lava flea to get them to their destination, and having witnessed many mechanical breakdowns on Mustafar -- and their invariably fatal consequences -- their reasoning is sound.

Some attempts have been made to spread the lava flea offworld, but this has met with limited success. The specific minerals that the flea thrives on are too expensive to replicate or ship off- planet, and the biological process that metabolizes those minerals renders them worthless, thus limiting attempts to recycle the material. There are reports of crime lords and other unscrupulous sectors dabbling in larval borer trade, using the acid-filled pre-flea worms as ghastly means of torture and corpse-disposal.

As evidence of the hardiness and tenacity of life in the galaxy, a world as inhospitable as Mustafar has borne a variety of well- adapted life-forms on and beneath its hellish surface. The native Mustafarians have domesticated an enormous species of hard- shelled arthropods. These Mustafarian lava fleas are capable of walking on the encrusted surfaces of lava flows and atop the searing rock of the volcanic planet.