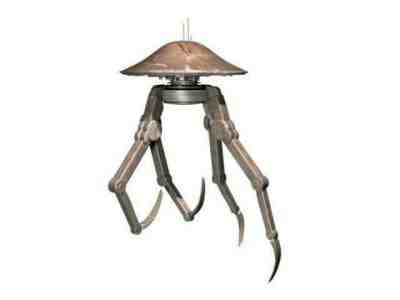 Description: The Cybermata Lifting Droid is a very specialised design of robot, built to lift heavy cargo and materials as quickly and as flexibly as possible. The repulsorlift drive in this droid allows it access to areas that humanoid droids have problems reaching, and the speed of it means that this droid is sometimes used to clear blockages and obstructions from roads or race tracks (the Pod Race at Mos Elspa is an example of this). This droid is cheaper than its competition, faster than its competition and far more capable than its competition, but has sold poorly due to its inaccuracy. This inaccuracy is caused by two problems within the droid, firstly its sensorium is no bi-optical making the droid poor at judging distance, secondly the cargo handling hooks which although powerful can cause damage to cargo or become locked into the cargo it is carrying. These flaws have forced the droid out of construction, however on poorer backwater worlds it is still fairly common due to its bargain basement pricing.


Page designed in Notepad, logo`s done on Personal Paint on the Amiga.
Text completely by FreddyB. Image is by Lucasfilm, copyright resides with them.
Any complaints, writs for copyright abuse, etc should be addressed to the Webmaster FreddyB.