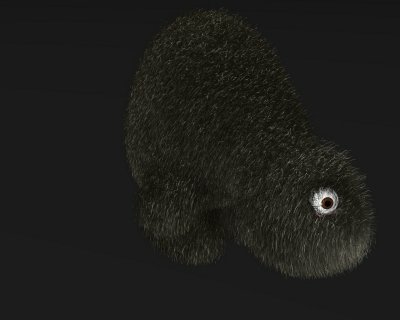 Special Abilities
Digestion: Can digest any vegetable matter, and many non-organic types of matter too, although meat makes them ill.

Description: Lumpies are a domesticated pet which have spread across the galaxy, and although they are not popular pets, their strong digestive systems have allowed them to thrive on worlds where they have been introduced. They were bred and sold as fashionable pets in a fad about 200 years ago, and they were brought onto a great number of planets as docile and cute pets, however when the fad passed the majority were dumped and left to look after themselves. Their herbivorous nature and ability to survive on almost any type of vegetable matter, from luscious Vertis leaves to solid lumps of Greel wood, allowed them to survive and flourish on most worlds they had been introduced to. Although not as popular pets as they once were, they are still common domestic pets, since they are completely safe pets for children, since they do not bite and any meat makes them violently ill. They do however eat almost anything other than animal flesh, and more than one owner has gone to answer their beeping commlink only to find it in their Lumpies stomach, or in a pile of Lumpy vomit. Because of the cheapness of keeping a Lumpy, since the owner need only collect some lawn cuttings to keep a Lumpy well fed for weeks, many freighter captains keep them for company on long journeys, finding the cute furry creatures to be excellent if quiet animal friends during the extended periods of loneliness in hyperspace. The species origin is now lost as is its real name, the name "Lumpy" and "Lumpies" dates back to its popular phase and was probably a joke name given to the species as an advertising gimmick, but has not stuck as it is a fairly descriptive term for this odd species.


Page designed in Notepad, logo`s done on Personal Paint on the Amiga.
Text completely by FreddyB, who refuses to take the blame, its all Bob's fault. Image is by "Bob the Dinosaur", copyright resides with him.
Any complaints, writs for copyright abuse, etc should be addressed to the Webmaster FreddyB.