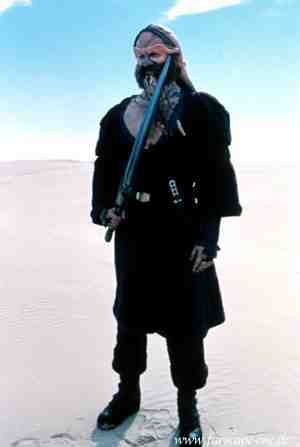 
Luxans are a warrior race with an ancient and proud heritage, dating back many thousands of years. Once they travelled the stars using extremely advanced technology, however they have now lost this technology, but some examples of it remain in existance. They are rebuilding towards their once highly technological status, and although they only recovered the ability to write as little as 300 years ago, but they have already become a starfaring species once more. The Luxans have entered into an alliance with the Sebacean PeaceKeepers, however the xenophobic Sebaceans have made this fragile, with many Luxans feeling that they are getting mistreated by the Sebaceans. The Luxans are a large powerful species, almost as heavily muscled as the Wookies, although they are not as massive or beastial as that other warrior race, Luxans heads are tentacled with fleshy appendages called tenkas and they use tattoos as military insignia. One of the Luxans greatest honors is to be asked to attend an Orican (Luxan holy woman) during the Ritual of Passing.


Tongue: The Luxan tongue is a vestige of their animal past, and can lash out like a frogs, reaching up to 2 meters, requiring a Brawling roll to hit its target. The tongue is also coated in an adaptive venom, which knocks the target into unconsciousness if they fail to resist its 5D strength. The venom is adaptive to the victim, never causing more than unconsciousness, and adapting to resistances to poisons and venoms.


Hyper-Rage: Luxans have a violent temper which takes them many years to learn to control, although by the time they are fully adult they have learnt to control it. However in times of extreme stress, and when extremely upset, their fragile grip on their temper can fail leading them to enter Hyper-Rage. When in Hyper-Rage a Luxan will black out and may attack friends and family as well as enemies, having no memory of happened during the hours that they were in Hyper-Rage.

Honour: Luxans are honourable and proud warriors, leaving their families behind if they should betray or dishonour themselves or their family.