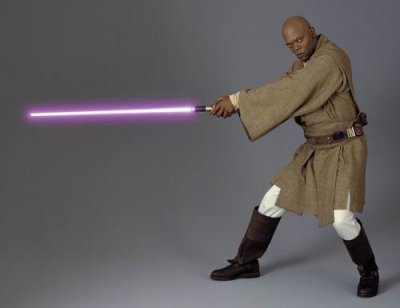 
Though a member of the High Council since the age of 28, this did not dull Windu's fighting edge or his willingness to venture forth on dangerous missions. His exploits are legendary, and he was an inspiration to his fellow Jedi, leading through rigorous example and steady discipline.

In his day, Mace was one of the best lightsaber fighters of the Jedi order. It was said only two opponents ever bested him -- Yoda, and Dooku. Only the most skilled of the Jedi could master the his Form VII discipline of combat -- the deadly technique known as vaapad -- for its aggressive nature treaded dangerously upon dark side practices.

Among his better-known assignments in the service of the Republic was an expedition to Yinchorr to investigate the deaths of two Jedi. Also, Windu spearheaded a diplomatic mission to Malastare, to forge a truce between the Red Iaro terrorist group and the people of Lannik. Shortly thereafter he uncovered illegal animal trade on Nar Shaddaa involving akk dogs -- deadly yet beloved predators native to Mace's homeworld of Haruun Kal.

One of Mace's numerous apprentices was the Chalactan Jedi Depa Billaba. Under his skilled tutelage, Billaba became a remarkable Jedi, ascending to rank of Master herself and earning a place on the Jedi Council beside her former Master. Another of his Padawans was Echuu Shen- Jon, a Jedi who would ultimately survive the dark times.

The Clone Wars were a trying time for Windu, as he had to adapt to the new role of the Jedi as military leaders. Not all the Jedi agreed with their positions as Generals in the wars, and a group of dissident Jedi splintered from the order. When Mace went to parley with these dissidents, he found himself in the jaws of a trap -- the meeting was a set-up. Asajj Ventress, an agent of Count Dooku, attacked Windu. Though Asajj was outmatched and fled, Mace Windu reported this new threat to the Jedi Council. It was further evidence of the rising tide of the dark side.

Four months into the Clone Wars, Mace led clone troopers against Confederacy forces that had amassed on Dantooine. The Separatists planned on securing a launch-point on Dantooine to defend the nearby world of Muunilinst, and hoped to prevent the Republic from doing the same. Mace's troops were decimated by the terrible power of a seismic tank, and even though he was temporarily disarmed in the confusion of the battlefield, Mace was able to single-handedly defeat the droid forces and destroy the tank.

Six months into the Clone Wars, Mace Windu received a disturbing report that his former Padawan, Depa Billaba, had possibly gone mad on the battlefront of Haruun Kal. He returned to the inhospitable jungles of his homeworld to seek out the rogue Jedi, and got a firsthand look at the horrors of the Clone Wars.

A respected Jedi on par with the venerable Yoda, Mace Windu was a senior member of the Jedi High Council. His wisdom and experience were legendary, and his words carried great weight.

In the later years of the Republic, Windu spent most of his time in the Jedi Temple of Coruscant. He regularly conferred with Yoda and the ten other members of the Council, contemplating the very nature of the Force and the affairs of the Jedi Knights.

Windu was well schooled in Jedi philosophy and history. He knew of the ancient prophecy of the Chosen One who would return balance to the Force. When maverick Jedi Master Qui-Gon Jinn approached the Council with a prospective candidate to fulfill that prophecy, Windu was hesitant. With reservations, he agreed that the child, Anakin Skywalker, could be tested for Jedi potential.

Though Anakin had the highest midi-chlorian count on record, and indeed showed great potential, the Council and Windu decided that he was not to be trained. He was too old to begin the life of a Jedi. After Qui-Gon's death, the Council rescinded their original decision, and granted Obi-Wan Kenobi permission to train Anakin Skywalker. Still, Windu fostered a mistrust of Skywalker, feeling that he was too powerful for his age and too unpredictable.

Windu, a diplomat by nature, believed in the power of words over action. But as the galaxy found itself increasingly fragmented by the rise of a powerful secessionist movement, he grew to question some of his firmest held beliefs.

He thought it impossible that the Separatist leader, former Jedi Count Dooku, could be behind the escalating flashpoints of violence in the galaxy. Such aggression was not in his character, Mace reasoned.

When an intelligence report from Jedi Knight Obi-Wan Kenobi revealed the Separatists gearing up for war, Windu came to realize that the time for negotiation had passed. Though he reminded the Supreme Chancellor that the Jedi were peacekeepers and not soldiers, as the Clone Wars began, the Jedi found themselves leading platoons of clone troopers into battle.

Reversals such as these troubled Master Windu, for they came about too suddenly, and the usually prescient Jedi were unprepared. Something was clouding the future, and the order's very connection to the Force was weakening. That a Sith Lord existed somewhere in the galaxy, was not in doubt but could this shadowy villain really bring this much imbalance to the Force?

At the first engagement on Geonosis, Windu arrived ahead of the clone trooper army with a Jedi taskforce. He was there to free Jedi held captive by Count Dooku. In the battle that ensued, Windu faced Dooku's hired gun, bounty hunter Jango Fett. Though Fett had proven himself deadly against other Jedi, he was no match against Windu. The Jedi Master repeatedly deflected Jango's incoming blasts, and quickly decapitated the hunter with his lightsaber.

As the Clone Wars erupted on Geonosis, Windu led a special squad of commando clone troopers into the thick of battle. He would be one of the few Jedi to return unscathed from that first engagement... at least physically. His spirit would suffer in the years that followed.

Though the Jedi were loyal protectors of the galaxy, facing war on the battlefronts in command of the clones, Windu felt uncertain about the direction of the Republic. As the war carried on year after year, Supreme Chancellor Palpatine amassed more political power, modifying the Galactic Constitution in the name of security. A wary Windu grew to distrust Palpatine, and he feared that the Chancellor would make a move to take direct control of the Jedi Council.

Palpatine's first step in that direction appeared to be the installation of a personal representative on the Jedi Council. The Chancellor requested that Anakin Skywalker, his close associate, be appointed to the ruling body. The Council, surprisingly, agreed. They hoped to use Anakin as a conduit of information, to learn of the Chancellor's dealings. It was a difficult decision, indicative of the stressful times. Windu had deep reservations -- it was very dangerous, he sensed, to keep Anakin and Palpatine close together.

His concern was justified. Chancellor Palpatine was, in fact, Darth Sidious, the Sith Lord that had escaped Jedi detection all this time. It was Anakin Skywalker who loyally delivered news of this discovery to Windu, though the Jedi Master still did not fully trust the young Jedi. Mace gathered a team of his finest Jedi warriors -- Saesee Tiin, Agen Kolar and Kit Fisto -- to arrest the Chancellor. Though Skywalker wished to accompany Windu, the Jedi Master forbade it. He ordered Skywalker to stay in the Council chambers until the matter was resolved.

The Jedi barged into Palpatine's most private offices. Mace attempted to arrest the Chancellor, but Palpatine sprang into action. Brandishing a lightsaber, Palpatine dropped the guise of harmless politician and emerged as deadly Sith Lord. Sidious quickly killed Tiin, Kolar and Fisto and forced Windu back into the main office chamber. Just then, Anakin Skywalker arrived, disobeying Windu's direct order.

Windu had disarmed Sidious and cornered the treacherous Sith Lord into the frame of his expansive office window. Fearing that Sidious was too powerful to take prisoner -- the Dark Lord still had control of the Senate and courts -- Windu moved to deliver a deathblow. Torn between his loyalties, and needing Palpatine alive to fulfill his quest for arcane knowledge to preserve the life of his beloved, Anakin acted. In an emotionally charged action, Anakin ignited his lightsaber blade and sheared off Mace Windu's weapon hand before he could strike Palpatine.

Defenseless, Windu was bombarded with Sith lightning as Sidious unleashed a torrent of deadly energy at the Jedi Master. The forked bolts of lightning penetrated Mace's body, illuminating his form from within. The final blast bodily lifted him into the air, sending his form hurling into the Coruscant skies, to crash lifelessly somewhere in the vast cityscape below.