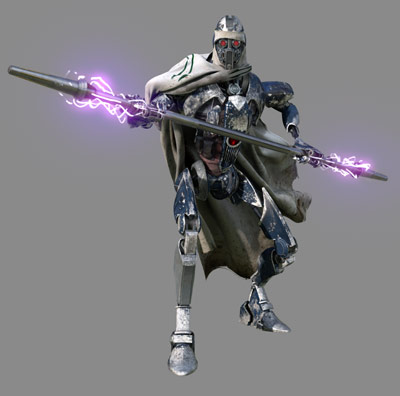 
General Grievous, the supreme commander of the Separatist droid armies, kept with him silent protectors known as bodyguard droids. The agile warriors carried impenetrable electrostaffs that scintillated with coursing energy, capable of blocking even a lightsaber attack. These near-mindless humanoid droids faithfully carried out their attacks for the General, tenaciously engaging their foe regardless of personal damage. A bodyguard droid would continue fighting even if it had its head severed.

Though General Grievous made do with the limitations of battle droid programming and technology for his limitless soldiers, for the guards tasked with protecting his person, he was more demanding. Count Dooku authorized Holowan Mechanicals, a company indebted to the InterGalactic Banking Clan, to develop a cutting edge warrior droid that would meet Grievous' standards.

The end result was the prototype Self-Motivating Heuristically Programmed Combat Droid, or the IG-series 100 MagnaGuards. When developing the droids, Holowan programmed into them all manner of combat forms, but prior to delivery, Grievous requested that their memories and combat libraries be wiped clean. Grievous wanted to train these guards, not program them. He wanted them to learn the combat techniques and improve from their mistakes.

Holowan Mechanicals delivered several MagnaGuard models, distinguished by their shell colors. Not all are schooled in the same forms of combat -- some are strictly close-quarters melee combatants, while others are trained to handle explosives and ranged weaponry. Some models come with twin guided missiles launched from internal magazines in their back plating. Continuing a tradition that stemmed from his days as a Kaleesh warrior, Grievous gave the droids headwrap and cape bearing the mumuu markings from Kalee.

Grievous employed dozens of the IG-100 MagnaGuards during the abduction of Supreme Chancellor Palpatine near the end of the Clone Wars.

Equipped With:
Inexpensive Vocabular: MagnaDroids have an inexpensive vocabulator, although their auditory sensors are advanced, allowing them to hear General Grievous' ultrasonic instructions but not reply.

Backup Processors: MagnaDroids have backup processor systems located in their bodies, allowing them to keep functioning and fighting even if their heads are removed.

MagnaPod Feet: MagnaDroids feet end in magnapods, which can magnetically adhere to metal surfaces such as starship hulls.

Enhanced Range Eyes: MagnaDroids have infrared visual sensors allowing them to see in the dark (+2D to search in darkness), which also include macrobinocular features.