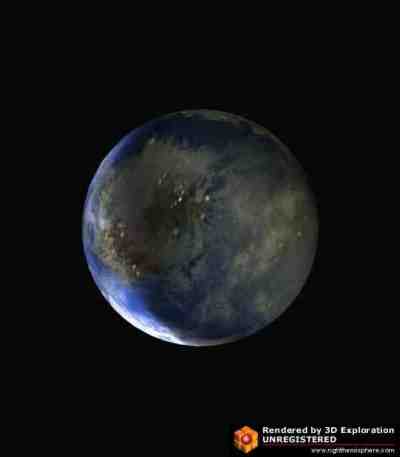 
Mandalore is the Homeworld of the Mandalorian people, and is the second world out from its star in a system that contains two gas giants (Juanna is one of these). Mandalore became inhabited when a colony ship suffered a hyperspace malfunction and crashed leaving the colonists stranded.

The planet has a variety of different terrain types and has 60 percent of its surface covered by oceans, but the continents are mainly desert with only thin strips of forests, jungles and vegitated plains around the edges. Most of the planet has been tamed and is safe for its inhabitants to walk aroud unarmed, however an entire continent, Verrakas has been left untamed, and the young warriors are sent here unarmed when they come of age, if they survive then they have passed their test and can be considered full warriors of the Mandalorian Empire.

Because the Mandalorian people are split into different clans, they occupy different areas and enivroments, eg the clan that mined most of the metals required for the Mandalorian people live in underground cities built into massive caves where they once mined. Most of the surface cities however were originally built by the ruling clan, and the warrior clans, so are combinations of military bases and memorials to the great warriors of the past. The largest of these is the Imperial City of Fernalate, named after the first Emperor, and different for the capital city of a large empire since it has very few high rise buildings, since it is in the middle of the desert at the site of the original crash the builders did not have to worry about lack of space. The city is filled with towering sandstone and white marble statues of the past Emperors, and many large sprawling administration and government buildings made up from large airy chambers their ceilings supported by many pillars.

Speeders are commonly seen and used by the inhabitants of Mandalore, and spacecraft are often used as well, since space travel is a common part of Mandalorian life.

There are a few spaceports and starship manufacturing facilities in orbit around Mandalore, however most of the starship construction actually takes place around Hyperius the outermost gas giant and elsewhere in the Mandalorian Empire.

Page designed in Notepad, logos done on Personal Paint on the Amiga.
Text completely by FreddyB. Image is from freespace.volitionwatch.com Copyright resides with the Artist.
Any complaints, writs for copyright abuse, etc should be addressed to the Webmaster FreddyB.